End of a fantasy
幻想的终结

A backlash against the state’s feisty conservatives fizzles out
对本州暴躁保守派的反抗终于失败 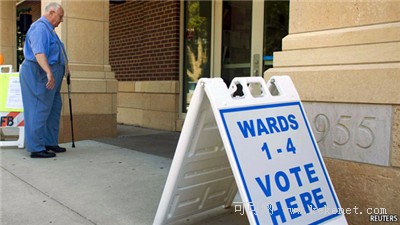 IN A neighbourhood of double garages and tightly cropped lawns, a woman stops her car in the middle of the road and leaps out to tell Randy Hopper, her state senator, how strongly she supports the reforms he and other Republicans legislators have championed in Wisconsin. There were not enough such voters to save Mr Hopper, who was turfed out of office in the middle of his term in a recall election this week. But there were enough of them to deny Democrats the majority they were seeking in the state Senate, and to dampen hopes on the left that aggrieved public-sector workers could restore their electoral fortunes nationwide next year.

In February the Republicans who control the state legislature had tried to push through a “budget repair” bill which aimed to reduce spending in part by severely restricting collective bargaining for the public sector. Government employees were to be stripped of any say in their benefits, while their pay, in future, would rise no faster than the consumer price index. The Democratic minority in the Senate, lacking the votes to block the bill, instead fled the state, depriving the chamber of a quorum. It was only after the Republicans worked out a parliamentary manoeuvre to get around the quorum requirement and pass the collective-bargaining reforms, three weeks later, that they returned, vowing to use every means at their disposal to avenge the Republican assault on labour.