No thanks to anyone
无需感谢任何人

America has avoided default, but political dysfunction is threatening its chances of economic recovery
美国违约杯具已避 “跛脚”政治风险犹存 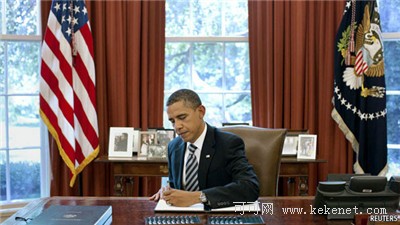 THE deficit-reduction deal that finally raised America’s debt ceiling and staved off the threat of default seemed to make no one happy. “A sugar-coated Satan sandwich,” one Democratic congressman called it. Republican candidates for president lined up to denounce it.

But even less popular than the deal itself was the process that led up to it: months of partisan wrangling, broken deals and brinkmanship, with the threat of default hanging over an economy struggling to grow. “Our economy didn’t need Washington to come along with a manufactured crisis to make things worse,” Barack Obama noted as he signed the deal into law on August 2nd—the day the Treasury had warned that it would run out of cash to meet its obligations.

The deal, hammered out just days before that deadline, promises $917 billion in spending cuts over the next decade in return for a two-stage increase in the debt ceiling of $900 billion. After that, a 12-member congressional committee, equally composed of Republicans and Democrats, is to find $1.5 trillion in further deficit reductions that Congress must approve by December 23rd, in return for a similar-sized increase in the debt ceiling. If the committee fails to reach agreement or its proposal is rejected, $1.2 trillion in spending cuts will be triggered, drawn equally from domestic spending and defence.