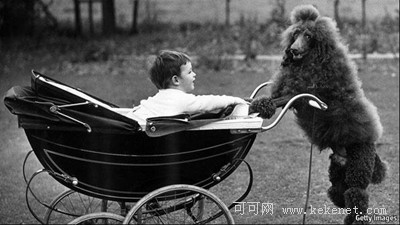 Dog Sense: How the New Science of Dog Behaviour Can Make You a Better Friend to Your Pet.
《狗的心灵世界：狗类行为科学新发展让你更加走进爱犬的内心世界》

THE relationship between people and dogs is unique. Among domesticated animals, only dogs are capable of performing such a wide variety of roles for humans: herding sheep, sniffing out drugs or explosives and being our beloved companions. It is hard to be precise about when the friendship began, but a reasonable guess is that it has been going strong for more than 20,000 years. In the Chauvet cave in the Ardèche region of France, which contains the earliest known cave paintings, there is a 50-metre trail of footprints made by a boy of about ten alongside those of a large canid that appears to be part-wolf, part-dog. The footprints, which have been dated by soot deposited from the torch the child was carrying, are estimated to be about 26,000 years old.

The first proto-dogs probably remained fairly isolated from each other for several thousand years. As they became progressively more domesticated they moved with people on large-scale migrations, mixing their genes with other similarly domesticated creatures and becoming increasingly dog-like (and less wolf-like) in the process. For John Bradshaw, a biologist who founded the anthrozoology department at the University of Bristol, having some idea about how dogs got to be dogs is the first stage towards gaining a better understanding of what dogs and people mean to each other. Part of his agenda is to explode the many myths about the closeness of dogs to wolves and the mistakes that this has led to, especially in the training of dogs over the past century or so.