Becoming Dickens: The Invention of a Novelist. By Robert Douglas-Fairhurst.
《成为狄更斯：一个小说家的创造力》作者 罗伯特·道格拉斯·菲赫斯特

THERE is an immediacy about Charles Dickens’s life, just as there is about his novels, a kind of bursting physicality. “If I couldn’t walk fast and far”, he once said, “I think I should explode and perish.” He exhilarated and exhausted himself. Both these biographies, timed for the bicentenary of Dickens’s birth next February, bring out the mad energy of the man. 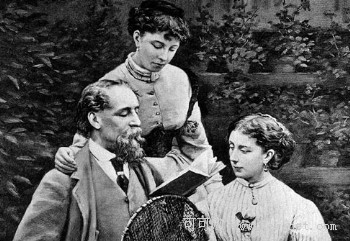 Robert Douglas-Fairhurst sets out to counter what he sees as the literary man-of-destiny version of Dickens, to recover the uncertainty, muddle and loose ends. He concentrates therefore on the early unsettled years, up to 1838 when, at 26, Dickens decided to sign himself “Charles Dickens”. Until then he had just been “Boz”, a sketch writer and the hugely popular author of “The Pickwick Papers”.

But writing was hardly a proper job. Since the age of 15, he had been racing through more plausible alternatives: from legal clerk, to courtroom and parliamentary shorthand reporter, then on to journalism and ambitions in the theatre. Mr Douglas-Fairhurst’s early cut-off date enables him to slow these years down, to listen for the echoes between the life and the writings and to draw on a broad range of contemporary references.

As he shows, the question of alternatives, of the road taken or not taken, fascinated Dickens. “See how near I may have been to another sort of life,” he wrote of himself at 20 when he had been on the point of auditioning as an actor. Or, more fearfully, he wrote of his 12-year-old self: “I might easily have been…a little robber or a little vagabond.” He came that close, he believed, when his father (the model for Mr Micawber in “David Copperfield”) was imprisoned for debt and, as was customary, the family joined him—except for young Charles who took lodgings and was set to work in a blacking factory.

It was the defining trauma of his life. It opened the crack in his imagination through which he saw, a hair’s breadth away, a whole world of other sorts of life: from the man next to him in the library, in his Boz sketch “Shabby-genteel People”, who blacked his clothes to hide the frays, to the terrified criminal in the condemned cell in “A Visit to Newgate”, just feet away from a whistling passer-by.

Mr Douglas-Fairhurst covers much ground, but one of his central ideas is Dickens’s pervasive sense of what might have been. He sees it in the false trails and shadow plots (take “Great Expectations”, where Pip imagines himself in one story though is really in another), in his doublings among characters and in his jostling possibilities and competing outcomes (for instance in “A Christmas Carol”).

“Becoming Dickens” is an ingenious, playful and often brilliant analysis as much as it is a narrative. In a sense, Claire Tomalin’s enormous task is more straightforward. She tells a story. Clear-eyed, sympathetic and scholarly, she spreads the whole canvas, alive with incident and detail, with places and people. She writes of publishers, illustrators, collaborators and all Dickens’s intersecting circles of friends and family. It is wonderfully done.

Mr Douglas-Fairhurst observes that almost nothing can be said of Dickens of which the opposite is not also true. Ms Tomalin richly bears that out. Here is the loyal friend and philanthropist, the champion of the poor—and also the bully. Here too is the man who could light up a room, the clown, the mimic and dancer of hornpipes—but also the obsessive who prowled the streets unable to “get rid of my spectres unless I can lose them in crowds”.

After his death, Dickens’s daughter Katey (shown above, with her sister Mamie, being read to by their father) said that she had loved him immeasurably, but that he was “a wicked man”. She was thinking of her mother Catherine, so passive, so overlooked and so constantly pregnant (they had ten children). Having decided she was the wrong wife for him, Dickens literally partitioned off her bed, then forced her into a separation while mocking her to their friends. Ms Tomalin takes care to notice Catherine and the other women in Dickens’s life. Power was vital to him, the power to make his public laugh and cry and love him for it—better still, to see them do it at his famous public readings. But a brutal streak went with it.

Ms Tomalin ends with an exhausted Dickens splashing his head in a bucket of water, and writing on. After all, it is the writer she is interested in, his range, invention and universality. Everyone read him in his lifetime, high and low. Speaking of Pickwick, she remarks that Dickens seemed to feed his story “directly into the bloodstream of the nation…making his readers feel he was a personal friend to each of them.” When he died, among the flowers at his graveside in Westminster Abbey were small bunches tied with rags.