DOES raising taxes on those who are doing well economically stifle growth and slow down the recovery? That depends on how rich people behave when their taxes rise. Do they work less when they are allowed to keep a smaller chunk of their income? Do they move their money offshore? Do they take a larger share of their earnings in forms that are more lightly taxed? Economists have looked at the effects of many past changes in tax rates to try to answer such questions. 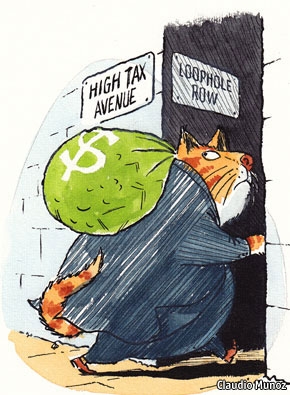 Martin Feldstein, a Harvard economist, found that the taxable income of the rich adjusted dollar-for-dollar with tax rates when America cut its highest tax rate from 50% to 28% in 1986, so that tax revenues stayed the same. This would suggest that raising top tax rates is likely to produce little extra revenue, while distorting economic behaviour further. But others have found that this adjustment in taxable income is driven largely by people altering when and how they take their income in order to minimise their tax burden. For instance, there was a big fall in taxable income after tax rates rose in 1993; but most of this seems to have come from a few rich people hurrying to cash in their stock options before taxes rose.
哈佛经济学家马丁·费尔德斯坦指出，1986年美国将税率上限由50％下调至28％，与之相应的富人应税收入也作出等额调整，总税收与往年持平。这就意味着提高税率上限可能不会带来多少额外收益，反倒进一步扭曲经济行为。但是，还有一些经济学家认为，对应税收入的调整主要是应富人的需求--他们通过调整获取收入的时间与方式，使赋税达到最低。举例来说，1993年税率上升后，应税收入大幅下降；这很大程度上是因为一些富人此前赶着在税率调高前兑现股票期权。

Thomas Piketty of the Paris School of Economics, Emmanuel Saez of the University of California, Berkeley, and Stefanie Stantcheva of MIT argue in a new paper that this is why few studies have been able to show any significant long-term effect from raising top tax rates. But such avoidance, they say, is merely a symptom of a poorly designed tax system. It is silly to have a high tax rate while simultaneously giving people many ways to avoid paying it. So the first task of tax reformers must be to minimise such opportunities by having a broader tax base, better enforcement and similar tax rates for different kinds of income.

That is relatively uncontroversial. But their other finding is likely to raise a few eyebrows. They reckon that if the tax system were reformed to make evasion impossible, the top tax rate might be able to rise to as much as 83%—that is, to levels last seen in the 1960s—without hurting the economy. This is because people do not seem greatly to adjust how much they work when tax rates change. Higher top rates may also discourage big earners from spending too much of their time trying to bargain for a larger share of the overall pie.

Now all that remains is to remove the loopholes. On past experience, America’s rich need not lose sleep over that.