SLOWLY, though his heart was pounding like a runner’s, Roman Opalka approached the canvas. He had painted it completely black. The date, though he set no store by dates, was 1965. Clenched in his left hand was a pot of white acrylic paint; held tightly in his right was a No. 0 brush, the smallest standard size. He dipped the fine tip into the paint and then, very gently, as if in slow motion, raised his arm. His hand was trembling. Carefully he painted the figure 1 at the top left-hand corner of the canvas. At the same time he whispered, in his native Polish, jeden, one. The moment was so charged with emotion that he thought he might collapse. Instead, he had begun. 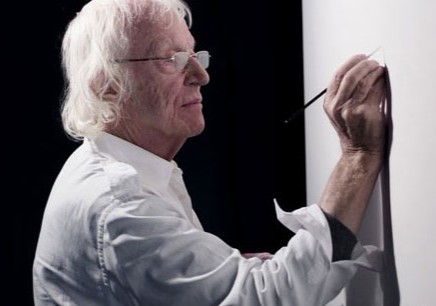 He had thought about this for years, wondering how he might visualise time. He did not mean the time of clocks or calendars or hour-glasses; those were merely instruments of convenience for fixing points at which to have coffee, or feed the cat. That was time you could even reverse, by winding back the clock or tipping the hourglass over. He meant the irreversible continuum of time that flowed through him, the pulse of his life approaching his death within the vastness of infinity. For some years early in the 1960s he had played around with dabs and zigzags of monochrome paint on canvases which he called “Chronomes”, but he concluded that time was more orderly than that. By painting numbers in careful succession from one to infinity, or as near to it as he was destined to get, he would make a work of art that tracked as well as anything the movement of time in a life, and life in time.

The idea came easily enough, while he was waiting one winter day in a cold café in Warsaw for his wife and his friends to come, glancing impatiently at clock and watch, drumming the moments away on the table. But it demanded nothing less than the sacrifice of his life. From the moment of painting the figure 1 until the day he died, when he had reached well past 5500000 (no commas marred his work), his daily task was painting numbers and whispering their names, eventually into a tape recorder. Hence his extreme emotion when he began: his own “big bang”, signalling his own creation of space-time.

Each canvas was called a “detail”, and all had the same title, “Opalka 1965/ 1-∞”. Typically he would paint around 400 figures a day, standing almost motionless at the easel. He tried not to travel much, did not take holidays, and if the journey was unavoidable made what he called cartes de voyage, continuing his numbers in black ink on ordinary white paper. The work became so absorbing, so meditative, that he would try to paint at the deepest hours of night, when only the bark of a dog or distant cock-crow would disturb the southern French hillside where he lived.

Heart trouble bothered him, and he once found the little paint-pot almost too heavy to lift, but he never considered stopping. The number 7777777 floated in his mind as a sort of completion of his “programme”; but in fact the completion would be his death, as he often said. Some critics saw his project as a sort of suicide, and he did not altogether dispute that. No sort of afterlife tempted him, he had no belief in one; but he very much liked a story by Marguerite Yourcenar in which a man built a boat and set out into infinity.

Over the 46 years of his enterprise, his technique and materials barely changed. His canvases, 233 in all, were always 196 x 135cm, a good size to work at standing and to carry in outstretched arms. Brush and paint never varied. His figures were roughly a centimetre tall,

most made with two deliberate strokes of the brush, and allowed to fade away as his paint ran out, like the trailing tail of a comet. He often said he painted like a man out walking, unaware of his steps unless he stumbled. If that happened, he never went back.

His biggest innovation was to change the background colour. In 1968 he made it grey; in 1972—when, barely able to breathe, he passed 1000000—he decided to add 1% more white to that grey every year. By 2008 the white of ground and figures was virtually the same, except that he thought of the ground as “well-earned white”, arduously brought out of the original black, and except that the newly painted figures would shine out against it until they dried. He approached this invisibility with a sort of exaltation.

From 1968, at the end of every working day, he took a black-and-white photograph of his impassive face against the canvas. This too was part of the project. It was not egoism or narcissism, he insisted. After all, his art told people nothing about his quotidian life. None of it—the birth in France, the childhood in Poland interrupted by war, the art studies in Warsaw, the year in Berlin—seemed important beside the immensity of the self-imposed task. He spoke about that, when asked, rather diffidently, softly rubbing the rims of his glasses in one hand, talking of Heidegger and Pascal and the notions of number held by the ancient Greeks, smiling often with what seemed to be repressed joy. And why not? Though people saw him as a prisoner, he felt more liberated with every stroke of the brush. Each of his self-portraits, with steadily silvering hair and whitening skin, showed him progressing as inevitably as his numbers into the infinity he longed for.