Like most mayors, Ghulam Haider Hamidi had big dreams for his city. He imagined wide, paved roads where the traffic flowed freely. He hoped for first-class schools with computers, and housing developments where the rich would flock to live. Tidy, well-regulated shops would line the streets, with trees and parks as green oases between them. By night the whole place would blaze with lights. And this city would be spotless, with fresh-laid sewage pipes, fresh-dug drains, and an army of workers to deep-clean the streets on a regular basis. Immaculate himself, in designer glasses and pure white perahan tunban topped with a perfectly matching brown wool jacket and scarf, the mayor wanted nothing less for the town he adored. 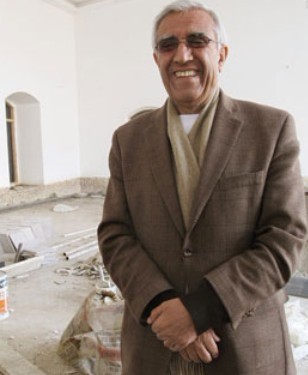 But this was Kandahar City, a sprawling desert entrepot of 800,000 people in the middle of a war, in southern Afghanistan. Its essence was dust, fumes, bicycles, raw sewage, horns, rickshaws, jerry-built apartments, teeming bazaars; and now thundering NATO convoys, blaring police trucks, the sudden whump of a bomb blast, and groups of grim turbaned men who were possibly Taliban, but possibly weren't, from their redoubts outside the city. In four years Mr Hamidi lost two deputies and a police chief to assassinations. In 2009, driving to work, his own car triggered a roadside bomb. Staggering out and running, blinded with dust, he looked back to see a figure sitting by the wreck with blood dripping from his hands. God had not written his name on that day.

Yet the Taliban, he felt, were only half the problem. The people he most wanted a jihad against were corrupt men at the heart of government. Entrepreneurs who won a city contract for lighting, produced inferior goods and put the profits in their pockets. Land-grabbers who rented government plots illegally to fly-by-night shops, taking money that belonged to the city. (Mr Hamidi would burst into such places with shovel in hand, pushing people aside, shouting at them to clear their rubbish away.) And, over all these, the swaggering local powerbrokers who demanded their share of the opium trade, the military contracts and the building projects, like boys fighting for candy at a wedding.

No figure brokered more power in the city than Ahmed Wali Karzai: head of the provincial council, unsavoury ally of the NATO forces and half-brother of Hamid Karzai, the president. But Ahmed Wali, as burly and bearish as the mayor was thin, was Mr Hamidi's friend. Both were Pushtuns, and had been close since childhood. It was Ahmed Wali who appointed him mayor in 2007, after the president had called him back from a 20-year exile in Virginia to make use of his accounting skills. He was offered even higher jobs, but those he rejected.

Mr Hamidi's enemies, most of them businessmen offended by his cleaning-up exercises, called him a puppet of the Karzais, their dog on a leash. That infuriated him. Yes, he had sold 10,000 acres of land to Mahmoud Karzai, another brother, to build the exclusive Aino Mina estate, but that was the best such project in Afghanistan, beautiful houses that would be the city's best source of income for a decade. Some powerbrokers he needed to befriend.He dared to walk the streets openly,grinning and kissing children and yelling at men who were relieving themselves in the road, because he also had the protection of Abdul Razak, the police chief; but Colonel Razak watched the flow of narcotics across the nearby Pakistan border, and his force was not above suspicion.

It was all much more difficult than his life in America, where he had spent the years of Taliban rule quietly keeping the books of a small travel company. He could have stayed there. But he would have been asleep. In Kandahar—close to the mountains and the cool, high villages of his childhood—he was awake, and he owed it to his country to remain. People inevitably saw him as the Americans' man, but this was his home, even though he had to live in a safe room in the governor's house, and had almost no staff. In his new heavily fortified municipal compound, only 38 of 119 employees dared to come to work. This meant that city revenue in the last financial year was only 200m afghanis ($13.3m), where he had hoped for 600m.

His family thought he should return to Virginia, where he was still paying off the mortgage on his comfortable house. He was not interested. His life was Kandahar City, with no time off. He had cleared away 460 illegal shops in order to build a school. He had plans for 300 acres of sports fields, and a special women's garden to match the one he had created, planted by a man from his home village, at the junction of the Kabul and Quetta roads. He wanted to expand the road from the city to the airport, and install more solar lighting.

Also, of course, he planned to talk to people. After the murder of Ahmed Wali early in July, he had no high-up protector; but that made him all the more passionate to explain why his ideas were good for the city. When protesters arrived at the municipal compound on July 27th, furious about the bulldozing of illegal houses in which two children had died, he went straight out to apologise to them. It was then that someone, maybe Taliban, maybe not, set off the explosives wound in his turban.