The Longest Fight: In the Ring with Joe Gans, Boxing's First African-American Champion. By William Gildea.

“THE whitest black man that ever entered the ring,” said a famous American sports writer a century ago in praise of Joe Gans. Given the place and the time, the comment was unexceptional. It is Gans's reaction to the insulting words that still astounds. Far from being offended, the first American-born black boxer to win a world title regarded it instead as a compliment. So, less remarkably, did his numerous white fans. 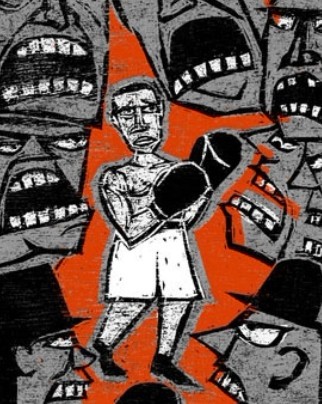 Against enormous odds, as William Gildea recalls in his episodic biography, Gans had by 1906 achieved the seemingly impossible. He actually left the ring a popular winner in successfully defending his title against Battling Nelson, a Danish-American, in Goldfield, Nevada. Even grizzled prospectors whooped when, after two hours and 48 minutes, the longest championship fight of the 20th century, Nelson was disqualified for a deliberate low blow.

Extraordinary stoicism earned Gans his lasting popularity in America. Born and brought up in Maryland, a state bordering on the old Confederacy, he had to put up with the everyday humiliations suffered by all African-Americans there. And, on top of these, he had also to tolerate the particular horrors suffered by America's black sportsmen.

Gans, a naturally polite and cheerful man, was tutored always to show restraint by Bob Fitzsimmons, a world champion at three weights, who argued that you should do as you would be done by. In consequence, Gans learnt to remain impassive in the face of the most egregious provocations: even, for instance, when one opponent called him “133 pounds of black meat” and when another spat in his face as they squared up in the centre of the ring.

Like other black boxers, Gans was exploited by the low-life types that inhabited professional boxing. Promoters paid him less than his white rivals, even when he was the main draw. His sleazy manager, Al Herford, bet heavily against Gans in two fights and then ordered him to lose. Gans eventually sacked his manager, confessed to the fixed fights, won international recognition as a fine champion and was mourned by thousands, white and black, at his funeral in Baltimore, when he died from tuberculosis at the then typically early age of 35.

Mr Gildea, a talented sports journalist with a ready following among American readers, is nostalgic for the days when crowds of 125,000 jammed into wooden stadiums to watch prizefights although not, of course, for the racism that then infected this and other sports. He is also nostalgic for the days when Goldfield was a rip-roaring, hard-drinking, sinful boom town. Those times, too, have gone. On a day trip to Goldfield, he saw several empty shops and houses, only four other people and a petrol station with a sign reading: “OPEN EXCEPT WHEN CLOSED”. This is a memorable book about a time that should not be forgotten.