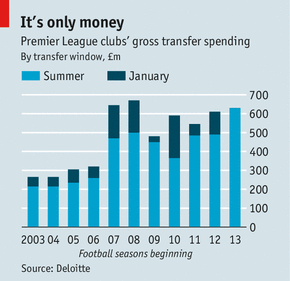 FOOTBALL’S transfer window may almost be viewed as a sport in its own right. Twice a year, in January and for two months during the summer, European clubs frantically buy and sell players. When the window slams shut, as it did on September 2nd, they are stuck with the squads they have assembled until the next one opens. Meanwhile, pundits pore over the transfer-market winners and losers, much as they would a weekend’s fixtures.

This summer English Premier League (EPL) clubs did record business. According to Deloitte, a professional-services firm, they spent a combined P 630m (dollars 985m) on new players. This is a new record, and far outstrips spending in other countries. The window’s most eye-catching deal, though, involved a player leaving England’s shores. The protracted pursuit of Gareth Bale, a Tottenham Hotspur forward, by Real Madrid, a Spanish club, ended only when the clubs agreed on a world-record P 85m fee.

Still, England remains football’s financial powerhouse. Net transfer spending by the EPL—the amount, after deals between English clubs has been stripped out, which flowed abroad—was P 370m. This compares with P 130m in France’s Ligue 1 and a P 95m surplus in Spain’s La Liga.

The main reason for EPL’s continued clout is a huge new television deal shared between British Telecom and BSkyB, which will run for the next three seasons. That will be worth an extra P 500m to the EPL this year, with each club on average P 25m better off. In 2011-12, the last season for which accounts are available, broadcasting accounted for half of the clubs’ combined P 2.4 billion revenue. The remainder was split between match-day revenue—mostly gate receipts—and commercial activities, such as sponsorship and merchandising. Deloitte estimates that, for the coming season, the clubs’ revenue will increase to P 3.1 billion, with the proportion coming from broadcasting rising to 55%.

Yet despite the arresting figures, the days of clubs living beyond their means are coming to end. From this season, premier-league clubs will be bound by two sets of “financial fair play” rules. The first, implemented by UEFA, the European game’s governing body, looks at clubs’ finances over a three-year period and limits their permitted losses to euros45m (dollars 59m). Clubs that flout this will be subject to punishments ranging from a warning to a fine to being banned from European competitions. The EPL has also brought in its own rules. These allow clubs more leeway with their debt, but restrict increases to clubs’ wage bills to P 4m, unless they can secure new commercial deals. Teams that break these rules face a ban on transfer activity and will have points docked.

Increased revenue means that most English clubs will comply with both rules. There is, however, uncertainty about Manchester City, a big-spending team owned by Sheikh Mansour, an Abu Dhabi royal. Its lavish transfer fees—the highest in the EPL—are funded, in part, by a P 400m sponsorship deal with Etihad, Abu Dhabi’s state airline. Under UEFA’s rules, it must prove that the airline has not paid more than the market value. Industry watchers are divided as to whether they will succeed. UEFA’s verdict is expected next year. Success on the pitch may now be determined as much by accountants and lawyers as by footballers and managers.