Some schools are teaching children how to think for themselves 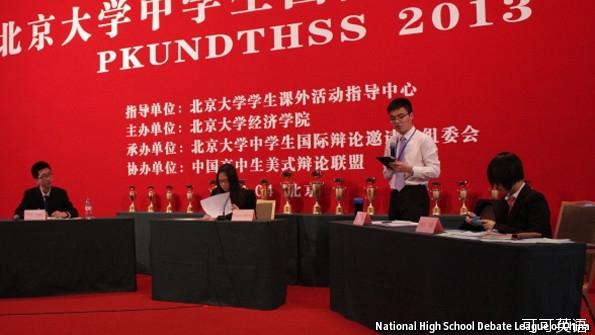 IN CHINESE classrooms, students rarely question teachers—part of a broader deference to authority in Chinese society. So the growth of Western-style debating in schools and universities, in which participants sometimes argue against prevailing Communist Party policies, can seem incongruous. But interest in such debates is growing.

Many schools, especially in the big cities, have teams that debate, in English and Chinese. Educators say the aim is to develop some of the skills they know are lacking: critical thinking, spontaneity and public speaking. Many students also believe taking part in debating as an extra-curricular activity can help with applications to universities in the West.

Chinese universities have debating teams but there are more political sensitivities at higher levels of education so the debates tend to be less wide-ranging, says Gavin Newton-Tanzer, an American who founded the National High School Debate League of China. Last year more than 200 schools took part in the group’s tournaments. Top debaters from the organisation have been invited to compete at Harvard and Stanford universities in America.

The debates are chosen carefully. “We are culturally sensitive,” says Mr Newton-Tanzer euphemistically. A motion deemed too political might be rejected, and the students themselves have strong views. At a tournament in the central city of Wuhan, students refused to debate whether China should forgive Japan for its wartime atrocities, insisting that they could never forgive Japan.

Gao Wenbing is a member of a school debating team in the coastal city of Qingdao. He says he knows there are certain “red lines” he can never cross, such as mentioning some sensitive issues. “But basically,” he says in flawless English, “I feel quite free.”

At one competition at Peking University, in which Mr Gao took part in May, students debated whether China’s rise is good for America or not. The debate went back and forth, with one participant, speaking for America, concluding: “we are the lighthouse of…liberty and democracy. Why do you think this ideology can’t prevail over the Chinese version of communist ideology?”