亚洲
Politics in Tamil Nadu: Rank and Bile
泰米尔纳德邦权术：地位与怒火
A vicious inheritance battle engulfs the state government.
一场惨烈的继位之战席卷政府。
ON THE various occasions that O. Panneerselvam, or “OPS”, served as the chief minister of the southern Indian state of Tamil Nadu, he made a point of being invisible.
担任印度南部泰米尔纳德邦首席部长的O. Panneerselvam（或者”OPS”），一直低调行事。
He knew that Jayaram Jayalalithaa, the head of his party, the All India Anna Dravida Munnetra Kazhagam (AIADMK) and chief minister for most of the past 15 years, had chosen him as a stand-in whenever she was battling corruption charges or illness precisely because he was so self-effacing.
他知道贾雅拉莉妲·贾亚拉姆——全印安纳德拉维达进步联盟的首脑和首席部长在过去十五年以来，无论是与腐败还是病魔斗争，都选择自己代其行事，因为他很谦逊。 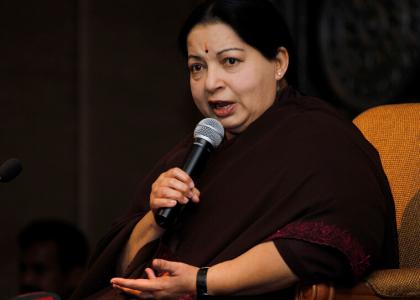 Even after “Amma”—“Mother”—a former idol of the Tamil film industry, died in December, Mr Panneerselvam meekly agreed to step aside as chief minister in favour of V.K. Sasikala , a woman who has no political experience beyond having lived with Ms Jayalalithaa for the past 30 years, but is claiming her mantle.

甚至在”阿妈”，即“母亲”——泰米尔电影业的前偶像于12月逝世后，Panneerselvam先生也顺从地同意辞去首席部长一职来支持V.K. Sasikala，这个女人除了过去30年和贾雅拉莉妲女士住在一起之外没有丝毫政治经验，但却将继承她的衣钵。
On the night of February 7th, however, OPS embraced the sort of melodrama he has so long eschewed.
然而在2月7日晚，OPS出席了之前一直回避的场合。
Sitting cross-legged before a flower-strewn memorial to Jayalalithaa, he spent 40 minutes in silent meditation, as television crews assembled and news alerts set smartphones bleeping.
盘腿坐在贾雅拉莉妲铺满鲜花的纪念碑前，他默哀了四十分钟，尽管周围挤满电视节目工作人员，智能手机发出新消息提示的嘟嘟响声。
At last he spoke—or rather, he declared, the spirit of Amma spoke through him.
最后他说话了——或者照他所说，是阿妈借他之口说出的话语。
She had instructed OPS to tell the truth: that he had been unfairly forced from office by Ms Sasikala, who has already become secretary-general of the AIADMK.
她指示OPS道出真相：他遭受了Sasikala女士的不公排挤，而对方已经是AIADMK总秘书长。
Others soon joined in.
其他人很快参与进来。
One of the party’s founders claimed that Jayalalithaa had been poisoned and pushed down the stairs.
政党的创立者之一声称贾雅拉莉妲被人下毒并被推下楼梯
Ms Sasikala called OPS the real traitor, and fired him as the party’s treasurer.
Sasikala女士认为OPS是真正的叛徒，开除了OPS财务主管的职务。
Tamil Nadu’s governor is supposed to be swearing in the new chief minister this week, but the outgoing one seems to want to rescind his resignation.
泰米尔纳德邦的首席部长本应这周宣誓就职，但是即将离任的那位似乎打算撤销辞呈。
Ms Sasikala was Jayalalithaa’s live-in assistant and gatekeeper.
Sasikala女士是贾雅拉莉妲的生活助理和管家。
In 1992 they were photographed at a temple taking turns to pour holy water on one another from silver urns, a ceremony typically performed by husbands and wives.
1992年她们被拍到在一处寺庙里，轮流给彼此泼洒银瓮里的圣水，通常那是一种由夫妇执行的仪式。
But they were a tempestuous pair: Jayalalithaa twice booted Ms Sasikala from her house before relenting.
但她们是关系跌宕起伏的一对：贾雅拉莉妲曾两次解雇Sasikala女士，但都因心软作罢。
They were both charged for amassing “disproportionate assets”; Jayalalithaa was briefly forced to step down—one of the occasions when OPS took her place.
她们都被指控大量非法敛财；之后贾雅拉莉妲被迫暂时下台——这是OPS暂替她的情况之一。
The charges may yet snare Ms Sasikala.
Ms Sasikala女士也可能陷入指控当中。
The AIADMK has always relied on larger-than-life personalities to win votes.
AIADMK总是依赖有传奇色彩的人物来赢得选票。
By the time Jayalalithaa died her face and name decorated countless canteens, hospitals and government handouts.
贾雅拉莉妲去世前，她的画像和名字装饰了无数的餐厅，医院和政府补助用品。
In such a personalised system, OPS has no incentive to go quietly.
在这样的个性化制度里，OPS没有动机来保持缄默。