Confucius said: "The superior man has nine things which are subjects with him of thoughtful consideration. 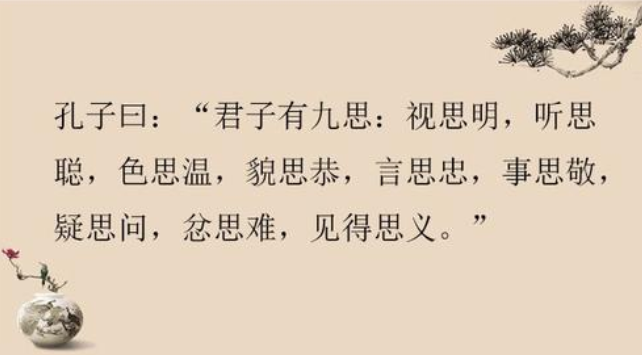 Confucius said: "Contemplating good, and pursuing it, as if they could not reach it,

孔子曰：“见善如不及，
contemplating evil! and shrinking from it, as they would from thrusting the hand into boiling water; I have seen such men, as I have heard such words.
见不善如探汤；吾见其人矣，吾闻其语矣。
Living in retirement to study their aims, and practicing righteousness to carry out their principles; I have heard these words, but I have not seen such men."
隐居以求其志，行义以达其道；吾闻其语矣，未见其人也。”
The Duke Ching of Ch'i had a thousand teams, each of four horses, but on the day of his death, the people did not praise him for a single virtue.
齐景公有马千驷，死之日，民无德而称焉。
Po-i and Shu-ch'i died of hunger at the foot of the Shau-yang mountains, and the people, down to the present time, praise them.
伯夷、叔齐饿于首阳之下，民到于今称之。
来源:可可英语 http://www.kekenet.com/Article/202001/603610.shtml
查看《论语》更多内容>>
保存到QQ日志   登录QQ空间
﻿