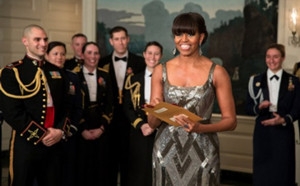 Lindsay Lohan's latest criminal case returns to court Friday for a pretrial hearing. Her attorney wants to negotiate a plea deal over misdemeanor charges that Lohan lied to police about a June car crash and was driving recklessly. The actress isn't required to attend the hearing.

Ja Rule is in a New York City jail with a July release date. The rapper left a state prison last week after serving most of his two-year sentence for illegal gun possession and went straight into federal custody for a tax evasion case. He failed to pay taxes on more than $3 million earned between 2004 and 2006.

Michelle Obama says reaction to her Oscars experience wasn't surprising. The first lady's satellite appearance at the Academy Awards provoked a national conversation about whether it was appropriate. She attributed the chatter to the internet generation and said she doesn't give a second thought to critical comments about what she does.

This is Hilary Fox with AP ShowBiz Minute

give a second thought 再三考虑