On the show today, we play music from Daft Punk.

We also look at a new movement in theater productions.

But first, we visit a California bar that serves up drinks in an East Asian tradition and party atmosphere. But it does not sell alcohol.

VOA's Elizabeth Lee visited with some families in the largely Asian areas of east Los Angeles. Karen Leggett has her report.

On any given night, college students and young workers crowd into the Factory Tea Bar. The room is filled with comfortable couches and other seating. The light is low.

The bar serves no alcoholic drinks. People come here for sweet tea. It is often served with ice, milk and boba from Taiwan. Boba are large, chewy balls of tapioca.

"The boba place is like unique to Asian people, and so if you want that Asian comfort you come to a boba of place, and so that you can feel at home with a lot of other Asian people."

Sociologist Oliver Wang says Tiffany Porter is part of what he calls the boba generation.

"I think the boba generation, if you will, can span everything from today's teenagers up through people probably of my generation. I'm in my early 40s now. And so it covers a good 40 years or so."

Oliver Wang says the current generation of Asian-Americans grew up seeing more Asian faces on television locally and through satellite. He says Asians are no longer stereotypes. And now they can see how other Asians like to be seen, like in the music video "Boba Life," created by comedians The Fung Brothers.

David Fung says boba is to the Asian-American community what Coca-Cola is to the rest of America.

"I know boba is even more ubiquitous in Taiwan than here, but they don't have the same culture built around it."

Boba cafes are supported by people from throughout Asia who live in southern California. Lina Yaore, an Indonesian-American, likes to socialize at boba cafes with her Indonesian friends.

Chatchawat Rienkhemaniyom is from Thailand, but he knew boba teas have international appeal. That is why he opened the Factory Tea Bar. He says the business is very healthy and growing.

And that way of life is spreading across the United States, says Andrew Fung of the Fung Brothers.

Boba cafes have become a sign of a cultural movement among Americanized Asians who are still connected with their ethnic identity, but proud to be Asian American.

Theater is designed to appeal to the heart and the mind. But it is mostly a passive experience, requiring little or no active involvement from theater goers. Now, three shows in New York have created interactive environments for their audiences. Mario Ritter has details. 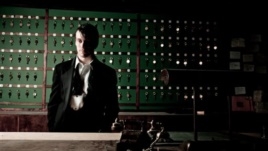 In this theater publicity image released by the O+M Co., Luke Murphy is shown in a scene from "Sleep No More," performing at The McKittrick Hotel in New York.

Rock musician David Byrne started thinking of making a musical about the wife of the former Philippine leader Ferdinand Marcos several years ago. As he researched the life of Imelda Marcos he made a surprising discovery.

"When I heard some years ago that Imelda Marcos really loved going to discos and that she had a mirror ball in her New York townhouse and, uh, turned the roof of the palace in Manila into a disco, I thought well, here's a powerful person who lives in that kind of bubble but also brings her own soundtrack to it."

David Byrne worked with the British musician Fatboy Slim to make an album about Imelda Marcos. It was released in 2010. Now, the two artists have turned it into a musical play. "Here Lies Love" opened in New York City in April. Recently, the Public Theater extended the hit show's performances through July.

But how is the show interactive? The theater is set up like a disco club.

Theater goers move around on the dance floor to follow the action. They also dance along with the actors.

Annie-B Parson is the play's choreographer. She designed all the dances.

"So, sometimes the audiences are amazing extras and, sometimes, they are taking in a play, but they're on their feet. So the sense of who the audience is changes throughout the piece."

She says the audience is partying with former First Lady Imelda Marcos.

"You're very aware that you shouldn't be dancing with Imelda, but it's too much fun to stop. So, I think it works."

On the other side of the city, another theater has put up a large tent. "Natasha, Pierre and the Great Comet of 1812" is based on a part of the famed Russian novel "War and Peace."

Dave Malloy wrote the musical play, described as a pop opera. He set it in a tent, made to look like a Russian nightclub. The set includes red velvet wall hangings and costly chandeliers.

Mr. Malloy says he went to Moscow to do research for the play.

"I went to a club called Café Margarita, which was this Russian, you know, bar that was full of people sitting at these crowded tables eating vodka and dumplings and then, in the corner, there was this little pop/classical music trio. And so when I saw that room, I was like, oh, this is the setting for this piece."

The audience gets champagne, vodka and a full Russian dinner before the show. The action takes place all around and sometimes in the middle of the audience.

Director Rachel Chavkin describes how this affects the actors.

"They have to be acting as if they're on film, with that sort of level of realism, but the size of the physical gestures has to read across space, to the person on the opposite side of the room."

Another theater company takes the interactive environment even further. The play "Sleep No More" is based on William Shakespeare's Macbeth. But its setting is very different.

The play is performed in a seven-floor warehouse. Audience members are guided around the building, to watch the play take place on different levels. They must cover up their eyes as they travel. They are also told they must not speak.

Producer Jonathan Hochwald says "Sleep No More" is the most interactive of interactive theater experiences.

"As an audience member, you can get lost in the woods or in a hospital ward or in a train station and really experience something unique."

Choreographer Annie-B Parson says the audiences at all three of these productions share one thing.

"That energy of being in the middle of a piece, is a real thing. And so, it's a very different experience than sitting in your chair, you know, ten, twenty, thirty feet away from a play, where you're squinting your eyes to see if the person's laughing or crying."

The two-man French group, Daft Punk, is on top of the American record charts this week with the album, "Random Access Memories." The sound is similar to disco music of the 1970s and 80s.
Daft Punk is Guy-Manuel de Homem-Christo and Thomas Bangalter. The two have been playing under the name Daft Punk for 20 years. But "Random Access Memories" is only their fourth album. 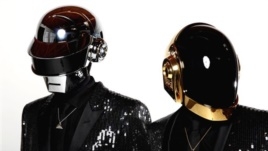 Thomas Bangalter, left, and Guy-Manuel de Homem-Christo, from the group Daft Punk pose for a portrait on Wednesday, April 17, 2013 in Los Angeles.

The record is number one on Billboard magazine's Top 200 Albums chart. It has already sold about 500,000 copies in the United States.

"Random Access Memories" probably could have reached similar success if it had been released 30 years ago. Many songs on the album have that disco sound, like this one: "Give Life Back to Music."

Daft Punk invited several musicians to perform on their latest record. One of the most surprising additions was Paul Williams. The 72-year-old singer-songwriter had many hit singles in the 1970s. He also created very popular songs for movies.

Paul Williams helped write two songs for "Random Access Memories" -- "Beyond" and "Touch," on which he also sings.

The artist and record producer Pharrell Williams also performs on the album in the hit single, "Get Lucky." Some critics say radio listeners will be hearing that song all summer long.

Join us again next week for music and more on American Mosaic in VOA Special English.