LONDON — The European Union has agreed to a multi-billion dollar fund to tackle its youth unemployment crisis, which has led to warnings of a lost generation. Even as the bloc struggles through the economic crisis, its expansion plans continue - with Serbia set to begin formal accession talks in the coming months.

In Spain and in Greece, unemployment among under-25s is running at over 50 percent.

In Portugal, there are lines every day outside the Angolan and Brazilian consulates, as job-seekers look for better fortunes in the country's former colonies.

It is a vicious downward spiral, says John Springford of the Center For European Reform policy group.

"When people have been out of work for a long time they tend to lose the skills that they have, they lose initiative, and also the social problems like drug and alcohol abuse can make them quite difficult to employ again," said Springford. 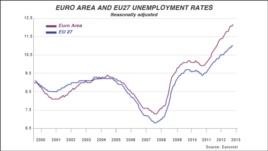 Meeting in Brussels Friday, EU leaders agreed to spend $7.8 billion over the next two years to tackle youth unemployment. Herman Van Rompuy is president of the European Council.

There are about 5.6 million unemployed young people in Europe - and the money simply won't be enough, says economist John Springford. 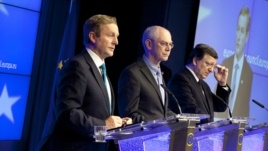 European commissioners have described this week as a good one for the EU - after a deal was clinched on a $1.25 trillion seven-year budget for the bloc, ending months of argument between member states.

"This is historic. Let's not forget what happened not so long ago in that part of Europe with one of the most violent wars we ever saw. And now we will start negotiations with Serbia," said Barroso.

Key to the accession process has been the Serbian government's willingness to negotiate, says James Ker-Lindsay of the London School of Economics.

"There has been a tremendous transformation that's taken place over the past year since the arrival of a new government which many people thought would be a step back. It had a reputation of being nationalist. But in actual fact it's made a whole range of moves, so most importantly on relations with Kosovo, which has been a very, very tricky subject since Kosovo declared independence in 2008," said Ker-Lindsay.

Meanwhile Latvia gained formal approval Friday to join the eurozone on January 1, 2014 - becoming the 18th country to use the currency.