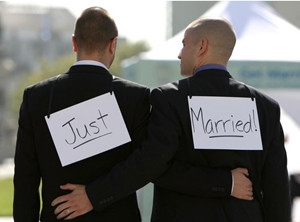 GWEN IFILL: Now we look at how the Supreme Court's rulings on same-sex marriage are being interpreted across the country.

Ray Suarez has our story.

RAY SUAREZ: The June decisions on the Defense of Marriage Act and California's Proposition 8 didn't end the debate over gay marriage. The issue is still on the docket in courthouses in New Jersey, Pennsylvania and elsewhere, up for debate in state legislatures, and on the ballot.

For an update, we turn to John Eastman, a Chapman University Law School professor and chairman of board of the National Organization for Marriage, and James Esseks, the director of the Gay, Lesbian, Bisexual and Transgender and AIDS Project at the American Civil Liberties Union.

What it does -- but it reinforces what we're already doing. That is, we have gotten to the place we're at right now, which is 13 states plus the District of Columbia, that allow same-sex couples the freedom to marry, through three different means.

RAY SUAREZ: Professor Eastman, last week, a New Jersey court heard an appeal of the existing state law there, based on the Supreme Court's reasoning in the DOMA case.

Montgomery County, Pennsylvania's registrar is marrying people, contrary to the laws of Pennsylvania, he says based on the Supreme Court's reasoning the DOMA case.

Does this change what the anti-legalization forces have to do now?

JOHN EASTMAN, National Organization for Marriage: Well, I think it's very important. And the people that are opposed to redefining the very core institution of marriage are going to continue to fight.

Justice Kennedy's opinion in the Defense of Marriage Act case rests heavily on the fact that states are the primary determiners of marriage policy in our country. So it's a little odd for somebody in Pennsylvania to say that, I'm going to use that decision to undercut the policy of Pennsylvania with respect to marriage.

Now, there are other parts of Justice Kennedy's opinion that are very flowery language that have a more equal protection-type aspect to them, but Justice Kennedy doesn't settle that question. Section 2 of the Defense of Marriage Act is still in place. And that says that no state has to recognize marriages performed in other states if it runs counter to the basic policy judgment of the state.

So the Pennsylvania local registrar, I think, is simply wrong. We're going to face that out in litigation there and in a number of other states where similar actions are being taken.

RAY SUAREZ: Professor, in those other states that have their own Defense of Marriage Act on the books, does the Supreme Court opinion send a signal that there may be some patches in the language, some things to make their laws federal DOMA-proof? Do there have to be some changes?

JOHN EASTMAN: I don't think so.

The statutes and the state constitutional provisions that define marriage as it has been through most of human history, as a man and a woman, don't need to be changed. Either the Supreme Court is going to find a right to redefine marriage in the federal Constitution and all of those will be invalid, including in all 37 states that continue to have traditional marriage laws, or the Supreme Court is not going to find that right in the federal Constitution or make it up, in which case we will fight this out in the states in the political arena, which in a democracy is exactly where basic policy judgments such as this need to be fought out.

RAY SUAREZ: James Esseks, as you mentioned, the fight was already well under way in a lot of states where people were just waiting to see what the Supreme Court would do.

If your look at a place like Illinois, where the Senate has passed a legalization law, the governor has promised to sign it if it reaches his desk, but it was pulled before it went to the House, what effect does the Supreme Court ruling have? Does it give new hope, new strength to people who want to make it legal in Illinois?

And it does it in some states in a very simple way. Prior to the demise of the Defense of Marriage Act, if Illinois gave, as it does, protections to same-sex couples in a civil union, you didn't get much in the way of different protections if you got a marriage.

And so there's now a vast disparity, even greater than there was before, between civil unions and domestic partner -- and marriage. I think that is going to mean that there are a lot of legislators who are taking another look at this issue.

RAY SUAREZ: Professor, you heard James Esseks say that it gives political strength to the pro-legalization forces. What is the assignment now for people who, like yourself, want to keep the situation where this?

JOHN EASTMAN: Well, I think the other side of that coin is what we saw happen in Illinois.

Both parts of the legislature are controlled by Democrats, and yet the African-American pastors rose up to put a stop to this train that was going forward in Illinois. And they almost single-handedly stopped the redefinition of marriage bill from going through the Illinois legislature.

And I think that's particularly interesting, because African-American pastors confront the demise of the family more than almost any other segment of our population. And what we're trying to do here is redefine the institution of marriage to say that fathers are optional. That's predictably going to have very devastating consequences on civil society.

And I think that's why this thing was pulled from the Illinois legislature before it went forward. People are standing back now and starting to think about the collateral consequences that may flow from this radical redefinition of marriage.

RAY SUAREZ: Is there a 50-state strategy, James Esseks, or have several different strategies been unleashed over the past several months?

JAMES ESSEKS: Well, we're continuing to work through multiple means to get more states that allow same-sex couples to marry.

Look, it's clear what marriage is. Marriage is about family and commitment and love. And when same-sex couples make the commitment that is at the core of marriage, it's only fair that they get the protections that should come with that and that come with marriage in America. And that's all we're looking for.

I think one thing going on is we have -- the change, the increasing patchwork that we have in terms of protections for same-sex couples in this country is leading to very significant problems. So, for example, we are representing a lesbian couple that lives in Northern Virginia. One of them works in D.C., and the two of them got married in D.C.

When this woman is at work during the day, she is married. She is a married woman with a daughter. And when she drives home to Northern Virginia on her commute at the end of the day, all of a sudden, in the eyes of the state of Virginia, she becomes an unmarried single mother.

That's not what her life is like. And it doesn't make sense to treat her as unmarried, when she has made the commitment at the core of marriage because she got married. She and her wife got married under D.C. law.

RAY SUAREZ: James Esseks, we are going to have to stop it there.

But, Professor, the next chapter in this is what America will do after a long time of all states recognizing all marriages and the federal government recognizing them all.

Gentlemen, thank you for joining us.

JAMES ESSEKS: Thank you very much.