WASHINGTON — Russian President Vladimir Putin has signed a treaty making Crimea a part of Russia in the wake of a weekend referendum in which residents of the Ukrainian peninsula voted overwhelmingly to join Russia. But many outside experts are raising questions about the legitimacy of the vote.

The reported results of the referendum in Crimea were overwhelming: 97 percent of those voting cast their ballots to join Russia. The announced voter turnout was over 80 percent. 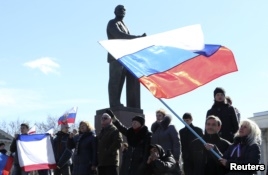 Participants in a pro-Russian rally wave Russian flags in front of a statue of Soviet state founder Vladimir Lenin in Simferopol, March 17, 2014.

But many analysts, including Robert Legvold with Columbia University, questioned the outcome.

"If it was an honest vote and all groups had participated, I would have thought rather than an overwhelming vote, it would have been something like 52 to 53 percent, given the percentage makeup of the groups in Crimea,” said Legvold. “The fact that it’s 97-point-whatever and they report a turnout of 83 percent, creates some suspicion that it wasn’t just the shadow of the Russian military presence, but maybe even some manipulation.”

Matthew Rojansky with the Wilson Center said the pro-Russian authorities in Crimea would not have held the referendum if they didn’t have a high confidence in the outcome.

“My sense is this was a product of the times in which there has been a real build-up of fear mongering and the overt pressure of armed men - there is nothing quite like a gun in your face.”

The United States and the European Union described the referendum as illegal and violating the Ukrainian constitution. Washington and Brussels reacted swiftly, imposing travel bans and trade sanctions on 28 Russian officials and four Ukrainians.

The White House said those targeted are Putin’s “cronies.”

Rojansky said over the last year and a half, Putin urged senior Russian officials to divest themselves from their international holdings - in other words, bring their wealth back to Russia.

“Anybody who has complied with him is sitting pretty and doesn’t have to worry about the international sanctions," he said. "And anyone who didn’t - well, it’s their problem; he can cut them loose.”

Rojansky believes the current sanctions are not strong enough considering that Russia has invaded another country. U.S. officials have made clear more sanctions will come if Putin continues to move against Ukraine.

“I don’t think Putin believes us. I don’t think he thinks we actually have the guts to impose really biting sanctions on, for example, the energy sector,” said Rojansky. “I think he just distrusts our resolve because we haven’t made it clear that we are willing to pay the pain on our side.”

Robert Legvold said stronger sanctions could have a negative on the global economy.

“Every step that escalates the penalty or the punishment also escalates the cost to those inflicting them, imposing the sanctions,” he said.

Analysts say it will be very difficult - if not impossible - to reverse what has happened in Crimea. Experts also say it will be interesting to see how far the United States and its Western allies are willing to go to punish Russia for its actions.