A new painting by the "guerilla artist" Banksy is currently the focus of a heated argument in the city of Bristol, England. The painting appeared overnight on a building. The leader of a nearby youth club, DennisStinchcombe, couldn't believe his luck when he saw it and discovered it was a Banksy that could be worth up to $150,000. He prised it off the wall using a crowbar and stored it in the youth club. However, the city mayor said Mr Stinchcombe had no right to take the painting as it was on the wall of a city-owned building. The mayor wants the painting put back. Stinchcombe said it would be vandalised and hopes to auction itto raise money for the youth club. He has since received death threats from angry Banksy fans. 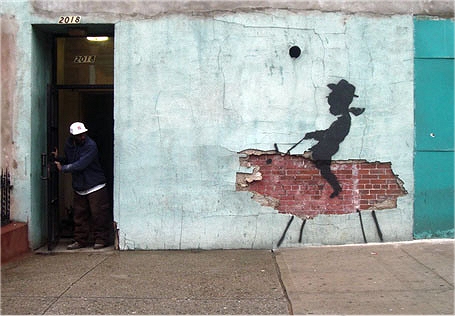 The painting has been called "Mobile Lovers". It depicts a man and woman embracing while checking out their mobile phones over one another's shoulder. Art by Banksy is much sought after the world over. The mysterious artist, who is only known by the pseudonym Banksy, has become famous for paintings left on walls and buildings around the world. Many have been removed by building owners and caused similar spats. Wikipedia says Banksy's work combines, "dark humour with graffiti executed in a distinctive stenciling technique." Banksy's work is heavy on political and social commentary. The city mayor said it was "against the spirit of Banksy and street art" to remove it from where the artist put it.