Residents of a Japanese town have broken the world speed record for building snowmen. Citizens at the Iiyama Snow Festival in Nagano made 1,585 of the snowy fellows in one hour to set the new mark. Around 630 people took part in the record attempt. The previous record was 1,279 snowmen, set in Utah, USA in 2011. The event in Iiyama Town coincided with the opening of a new train station for Japan's famous bullet train. Justin Patterson, the adjudicator from the official Guinness World Records organisation, said the event had been a wonderful occasion. He said: "Despite Iiyama being buried in snow, it is wonderful that the residents came out to tackle the challenge together in a positive light." 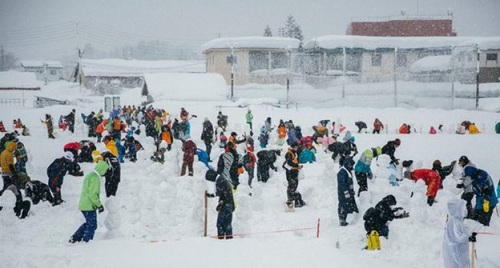 There were strict rules to be met for the record to be broken. One was that each snowman had to be at least 80 cm tall. In addition the snowmen had to be made of three separate snowballs, with eyes, a nose and arms. People used only their hands in the record-breaking endeavour. Committee member Jiro Kobayashi told Japan's Asahi Shimbun newspaper that the event was fitting for the opening of the bullet train station. He said: "We were able to achieve the record thanks to the cooperation of many people. We believe the feat will boost [the celebratory atmosphere of] the opening of the Shinkansen's Iiyama Station." Ichika Oguchi, 8,said: "It was tough because the snow didn't stick together, but I had fun."