A researcher has made a report that says having a lot of money makes you a bad person. Professor Paul Piffspent ten years looking at the personalities of rich people and found that their behaviour was very different to the behaviour of poor people. Dr Piff said rich people are more likely to break rules, not follow the law, and not care about other people. He also said wealthy people cheat more at games and are less likely to help other people. Professor Piff told the BBC that: "Wealth makes you more [worried about] your owninterests, your own desires, your own welfare." He added that rich people think their own goals and needs are the most important thing in their life. 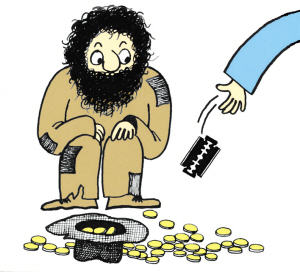 Professor Piff also found that poorer people are more generous than rich people. The poor give a higher percentage of their money to help others than the rich. He said poorer people give one-and-a-half times as much as richer people. He said: "The wealthier you are, the less generous you are. You give significantly smaller portions away to [other people]." However, he did say that rich people could change their behaviourand become nicer and more generous. He said rich people can help others more if you tell them that giving and helping is a good thing. He said: "Reminding people of the benefits of cooperation, or the advantages of community, causes wealthier individuals to be just as [giving] as poor people."