A couple in California got a huge surprise last year while they were walking in their garden. They found over 1,000 gold coins under a tree. The coins are worth over $10 million. They counted 1,427 coins. They were all in mint condition. The coins are from the period 1847 to 1894. Some of them are very rare and couldbe worth up to $1 million each. The couple said they were walking their dog and they saw some rusty cans sticking out of the ground under an old oak tree. When they dug down, they were shocked at what they found.The woman said: "It was like finding a wonderful hot potato. I never would have thought we would have found something like this." 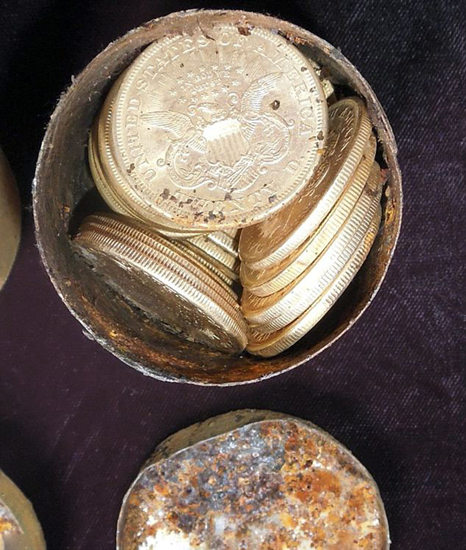 The couple said they plan to keep some of the coins and sell the others online. They will donate some of the money they receive to charity. They said they would use some of the money to make their house better. The woman had some advice. She said: "Whatever answers you seek, they might be right at home. The answer toour difficulties was right there under our feet for years." She added that people should never be afraid to bend down and look inside a rusty can. Coin expert David Hall made sure the coins were genuine. He was very excited and said: "I don't like to say once-in-a-lifetime for anything, but you don't get an opportunity to handle this kind of material, a treasure like this. Ever."