Britain will soon ban smoking in cars with children. Britain's government wants to reduce the harm cigarette smoke does to children. New laws will cut the chances of children passive smoking. This is when someonebreathes in the smoke from a cigarette. Many studies say passive smoking can almost be as harmful as actually smoking a cigarette. The British government said it looked at research that found children who sat in smoke-filled cars had health problems. Britain's leader David Cameron said the problem is particularly badin cars because there is so little space, so the car fills with smoke very quickly. The new law will make it illegal for anyone to smoke in a car that has a child in it. 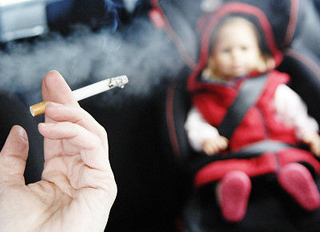 Not everyone agrees with the new law. Some lawmakers say it takes away the freedom for people to smoke in their own car. They believe people should be able to smoke in their car because there are so many public places where smoking is not allowed. A few lawmakers said they were worried the government might make the ban wider in the future, so no one could smoke in a car. However, Britain's health minister said the healthof children was more important than the freedom to smoke. He told reporters: "The liberty to smoke in yourcar in front of a child doesn't seem to me that important and protecting a child's health does seem to me to be incredibly important."