Relations between the USA and Cuba took a step towards becoming more normal on Friday when the leaders of the two countries, Raul Castro and Barack Obama, shook hands. They met briefly at the Summit of the Americas in Panama. This is a meeting for countries in North, Central and South America to discuss a better future for their continents. The historic handshake will help the USA and Cuba end their bitterness towards each other. The two countries have barely spoken for more than 50 years. America banned its citizens from visiting Cuba and banned most Cuban goods from being exported to the USA. Over a decade ago, the USA declared Cuba was a sponsor of international terrorism. 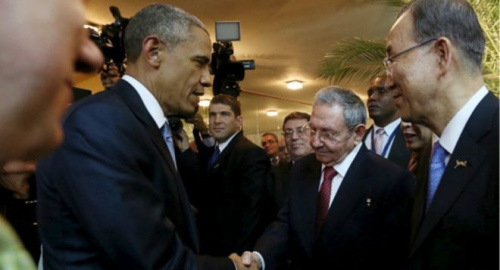 Castro and Obama are expected to have a sit-down meeting. They will discuss how to make sure their countries can have a better future together. The meeting will be the highest-level talks between the USA and Cubasince Richard Nixon and Fidel Castro met in 1959. A US security advisor said: "The reason we're here is that the President strongly believes that an approach that was focused…totally on seeking to cut off the Cuban people from the USA had failed." President Obama said: "I think the Cuban people are extraordinary andhave huge potential.And what's encouraging is the overwhelming majority of Cubans are interested in…moving forward." The two countries are only 151 km apart.