There is a new craze in South Korea that is very popular. It is watching other people eat online. The Reuters news agency reports there are over 3,500 people who eat live in front of their webcam. Thousands of people watch the shows. One of the most famous online diners is 34-year-old Park Seo-yeon. She is known as The Diva and has thousands of followers who watch her eat every day. She broadcasts her meals in real time for about three hours a day. She said she first tried it as a hobby, but then she started to get a lot of money. People click a link on her website to say they like her. She gets about nine U.S. cents per click. She now makes over $9,000 a month from her show and has quit her regular job. 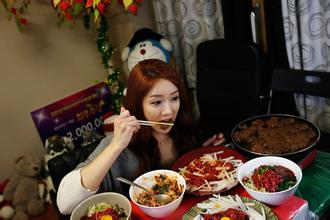 Many people in Korea watch the online dining webcasts because they are lonely. More and more Koreans are living alone in big cities and have no one to eat with. Reuters said: "One-person households are set to increase from 25.3 per cent of the total population in 2012 to 32.7 per cent in 2030." This is the fastest rate of any rich country in the world. Ms Park says she feels like she is providing a benefit to society. She told Reuters: "It is comforting for people who eat alone. It feels great when people said, 'Thank you for a fun and delicious time'". She also said people write to thank her for helping them with their eating problems. She enjoys being part of a big online community and talking about food.