A French man who was unemployed tried a new way to get a job. He put his CV (resume) on a giant billboard.The billboard was next to a very busy road. It was four metres long and three metres high. There was a photo of the man wearing a Santa Claus hat. There was a message on the billboard that said: "Trilingual operations manager seeks position in hotels, restaurants, tourism and leisure." About 70,000 people a day couldsee the CV from their car. Jobseeker Laurent Le Bret, 41, said: "All I want for Christmas is a job." His idea worked. A holiday resort contacted and interviewed him. He started his new position as an operations manager ten days after he put his resume on the billboard. 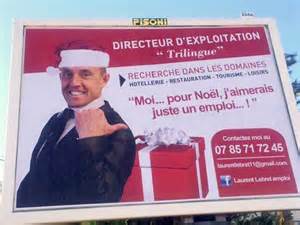 Mr Le Bret had help from the owner of the billboard. He was going to pay to put his CV on the billboard. However, the advertising company decided to give him the space for free. Mr Le Bret saved 2,000 euros (about $2,700) because he did not have to pay. The advertising company is called Pisoni Publicite. The company's CEO spoke to the France 24 news agency. He said: "We thought it was an interesting idea. When people come up with ideas like this we are always keen to see what we can do. We're very happy to prove that what wedo works, and that Mr Le Bret is back at work." Many people contacted Mr Le Bret after he got his job. They want to try the same thing. There are 3.3 million unemployed people in France.