Once upon a time, a woman dreamed of getting married in a fairy tale wedding. For one British woman, her dream came true. Amanda Gibbs, 44, married her fiance of eight years on Saturday in a ceremony that was nothing but fairy tale. The happy couple painted themselves green to look like the animation characters Shrekand Princess Fiona. They also donned costumes based on the attire worn by the characters. The guest list included friends and family dressed as Buzz Lightyear, the Gingerbread Man, Snow White and Minnie Mouse. The couple wanted a day to remember that was a little out of the ordinary. They stuck to their plan for a fairy tale wedding and tied the knot in truly unforgettable fashion. 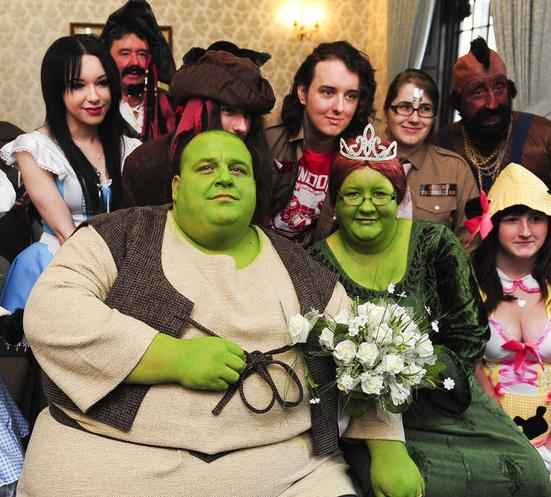 The wedding also had a serious side to it. They decided to use it to raise money for charity. They asked their guests not to buy them any wedding presents, but to donate the money to a cancer research charity instead. They had both lost friends to cancer. The groom, Nathan Gibbs, told reporters: "We thought it would be a great idea to raise money for Cancer Research. Our guests are all making donations to the charity andwe hope to inspire others to give money to the charity when they read our story." He added: "We've had a great day today and it's fantastic to think the money raised will go towards helping to support those with cancer and their families."