Cuba's government is making it easier for Cubans to buy foreign made, new and used cars. The Havana Times reports that: "The Council of Ministers of Cuba decided at its current meeting to open up the retail sale of new and used motorcycles, cars, vans and minibuses." It added that the government would also "prioritize bicycle sales on the retail market" and offer them at very affordable prices. New laws mean the government is further relaxing regulations on car ownership. Until 2011, people were not permitted to sell cars that were made after the 1959 Cuban revolution. This made Havana look like it was in a time warp as every car on the road was a vintage model from yesteryear. 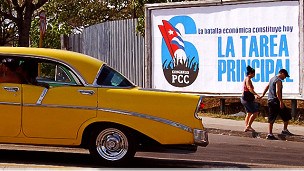 The Cuban government will set and control the price of all imported and new vehicles. It will also be the only entity that can import foreign cars into the country. Cubans will need to buy an imported car from the government. According to the Communist Party newspaper, all profits from sales will go towards improvingCuba's roads and transportation system. Car dealers are not anticipating a huge influx of sales. Most people in Cuba cannot afford to buy even a used car, let alone a new one. Havana resident Jorge Canso commented on this, saying: "Yeah, I can buy one, but with what? Unfortunately our economy doesn't allow us to savemoney to be able to buy one."