Britain's Duke and Duchess of Cambridge have named their newborn baby daughter. The two royals are better known as Prince William and his wife Kate. Their daughter was born on Saturday and since then the world has been waiting to see what the new arrival would be called. The parents waited two days before they told the world. Their new baby is called Charlotte. She also has two middle names, Elizabeth and Diana. Her official title is Her Royal Highness Princess Charlotte of Cambridge. She is fourth in line to the British throne. This means that if her grandfather (Prince Charles), father, and brother (Prince George) all die, shewill be Britain's queen after Queen Elizabeth passes away. 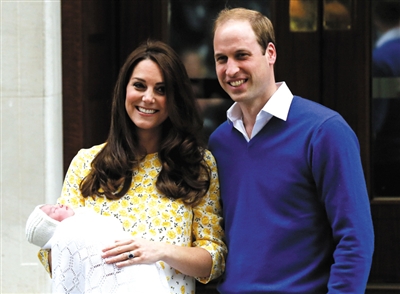 The British public is delighted at the choice of names for the new princess. Most people liked the fact that the names were traditional, and closely linked to members of the royal family. The name Charlotte is the female version of Charles – Prince Charles is her grandfather. There was a Queen Charlotte in the 18th century, who was married to Britain's King George III. The new princess' middle name, Elizabeth, is the same as her great-grandmother, Britain's Queen Elizabeth. Finally, her second middle name, Diana, is that ofher grandmother, Diana Princess of Wales, who died in 1997 when Prince William was a child. Tweeter Stephanie Clark said: 'I love that Diana's name is in there. Such a lovely tribute to her."