A horticultural company in the U.K. is marketing a revolutionary new plant that grows both tomatoes and potatoes. It is called the TomTato and yields up to 500 sweet, cherry-sized tomatoes and a healthy crop of white potatoes. Britain's Daily Mail newspaper joked you can now get ketchup and fries from the same plant. The company, Thompson and Morgan, began research into the possibility of grafting together tomato and potato plants over 15 years ago. Paul Hansord, horticultural director at the company, said the great thing about the plant is that it is not genetically modified in any way. He said he knew it was possible to graft the two plants together because they belong to the same plant species. 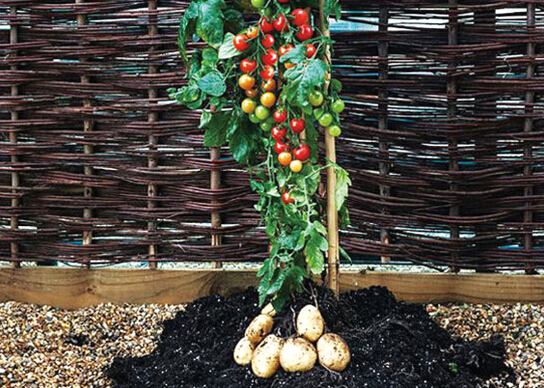 Mr Hansord explained how the commercial concept developed. He said: "At the start, we thought it'd just be a novelty thing to do. But as the trials developed, we realised what we had produced was really high yield, had fantastic flavour and could be done commercially for the first time. The TomTato is being dubbed as "veg plot in a pot". Hansord said it can be grown inside or outside, in a large flower pot or in a bag. It is selling at around $25 on the company's website. Britain's Telegraph newspaper said: "'Double-crop' plants like the TomTato could be extremely useful in the future, as they help populations grow more food in smaller spaces."