Egypt's President Abdelfattah el-Sisi attended a ceremony yesterday to unveil a major extension of the Suez Canal. The original canal was completed in 1869 and took 10 years to build. The new, $8.5 billion canal was constructed in just under 12 months, beating all predictions by industry experts that it would take five years. The canal provides a passageway between the Mediterranean and Red seas. President Sisi sailed up the canal in his presidential yacht, the El Mahrousa, wearing military fatigues to attend the inauguration. The El Mahrousa was the first ship to officially sail through the original canal nearly a century-and-a-half ago. President Sisi described the new canal as Egypt's "gift to the world". 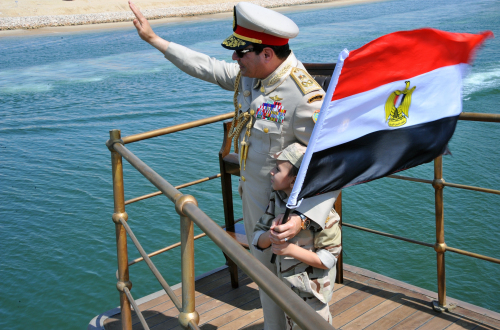 Egypt's government hopes the new canal will provide a much-needed boost for the country's economy. The head of the Suez Canal Authority, Mohab Mamish, said the new canal was important to ensure Egypt earns revenues from its waterways in the future. He told reporters: "If I can't handle this and turn it into revenue for the Egyptian treasury, alternative routes will emerge." He hopes revenues will increase from the current annual $5.3 billion to $13.2 billion by 2023. That means shipping traffic would need to grow from 49 per day at present to 97 by 2023. This would entail a nine per cent increase in global trade. Some economists have cast doubt on whether these figures can be met.