Fast-food workers in 58 cities in the USA did not go to work on Thursday. They went on strike because they want more money. The workers currently get paid the minimum wage. This was set at $7.25 in 2009 and has not changed since then. Many workers say they cannot afford to live on that. The price of everything has gone up but their wages have stayed the same for five years. The workers want $15 an hour, which is double their current rate. Julio Wilson, a cashier at a pizza restaurant, told the BBC he earns $9 an hour. He said that wasn't enough to support himself and his five-year-old daughter. He said: "I know I'm risking my job, but it's my right to fight for what I deserve." 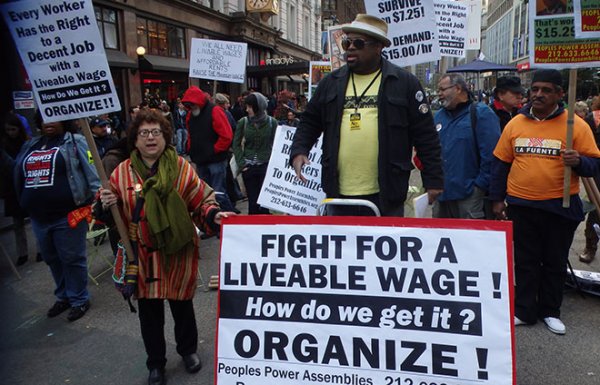 McDonald's and Burger King both spoke about the strike. They said they did not make decisions about how much to pay workers in most of their restaurants. They said each restaurant is an independent franchise and the manager decides how much to pay the staff. McDonald's profits were over $5.5 billion in 2011. The burger giants did say that an increase in wages would mean more expensive burgers. America's National Restaurant Association said the wages were low because the staff are young and have little work experience. It said: "Only five per cent of restaurant employees earn the minimum wage and those that do are [mainly] working part-time and half are teenagers."