Neil Armstrong, the first man to step foot on the Moon, has passed away at the age of 82. The legendary U.S. astronaut died from complications following heart surgery he had earlier this month. He made history on July 20, 1969 as commander of the Apollo 11 Moon-landing mission. As he stepped onto the Moon's surface, he famously spoke the words: "That's one small step for man, one giant leap for mankind." He was 38 at the time of his historic walk and instantly became one of the most famous people on the planet. However, he spent the rest of his life trying to avoid the spotlight and downplay his achievement. He later said he never understood why people focused so much on what he did. 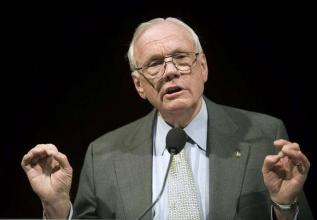 Armstrong was born in 1930 and grew up fascinated with flying after taking a plane at the age of 6. He began making model planes and collecting books and magazines on aviation. As a teenager, he got his pilot's license before his driving license. In 1949, he became a Navy pilot, and flew combat missions in the Korean War. In 1958, he joined the organisation that became NASA and became a test pilot. Years after his Moon landing, Armstrong was asked how he felt about knowing his footprints would stay on the Moon's surface for thousands of years. He said: "I kind of hope that somebody goes up there one of these days and cleans them up." When asked about the Moon, he said: "It's an interesting place to be. I recommend it."