The town of Buford, Wyoming, population one, was sold on Thursday for $900,000. The buyers are two unidentified men from Vietnam. Buford was advertised online as the smallest town in the USA. It is located between the Wyoming state capital Cheyenne and Laramie. It is on the Interstate 80 road that runs from New York to San Francisco. The buyers now own a gas station and convenience store, a schoolhouse built in 1905, a cabin, a garage, 10 acres of land, and a three-bedroom house. The online bidding for the town started at $100,000 and attracted bidders from 46 countries. The winning bidders flew to Wyoming especially for the auction. They had read about the town online. 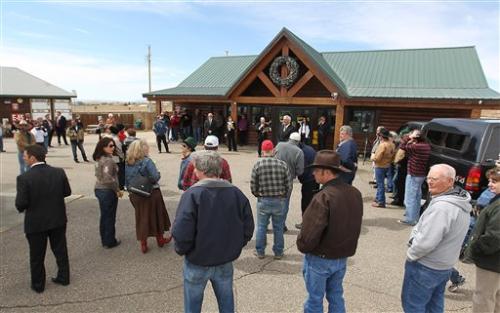 Buford's one former inhabitant was Don Sammons, aged 61. He bought the town in 1992 to settle down in the countryside. He decided to sell his property to be closer to his son. Mr Sammons said he would retire from his position as the unelected "mayor" of the town. He expressed his sadness at moving on from his home of three decades, saying: "When the gavel drops and the guy says, 'sold,' I might break down." He added: "I'm happy and I'm sad all at once. But I'm more happy than sad because I can continue and start the next chapter of my life." He was surprised at the global interest in the sale. "I've lived here for more than 30 years and nobody knew it. Now I'm leaving and the world knows it," he said.