Parents in Los Angeles started their day with this robocall, a frightening announcement that there would be no school today.
(SOUNDBITE OF ARCHIVED RECORDING)
UNIDENTIFIED WOMAN: Closing all campuses today due to credible terrorist threat at Los Angeles Unified School District, LAUSD.
SHAPIRO: An emailed threat shut down the country's second-largest school district — more than 900 schools. And the largest district in the nation, New York City, received a similar threat, but made a very different assessment. NPR's Nathan Rott begins our coverage from LA.
NATHAN ROTT, BYLINE: The parking lot at Hamilton High School in West Central Los Angeles was near empty this morning. Scrolling on the school's sign below the banner declaring home of the Yankees was the news in big red letters — school's closed. Ed Williams and Frank Wiley, two of the school's deans of discipline, were relaying as much in the parking lot to the few folks that hadn't already heard the news that there was a threat against the district.
FRANK WILEY: I've never seen anything like this before where we shut down the whole districts and charter schools and...
ED WILLIAMS: I think the last time we had something like that was '92 during the riots of Rodney King.
ROTT: Hamilton High School has 3,200 students Wiley says. As he's talking, Williams' walkie-talkie goes off.
UNIDENTIFIED MAN: The entire school should be searched. We're physically looking for a backpack or a package. No matter how long it takes, the superintendent wants the entire school searched looking for a backpack or a package.
WILLIAMS: No matter how long it takes (laughter).
ROTT: Williams laughs only because he knows how big of a task that will be. LAUSD has more than 900 public schools and more than 640,000 students. To search every classroom will take time, lots of time. But Williams and Wiley both think it's the right thing to do given the history of attacks on schools in the U.S. and the recent attacks in nearby San Bernardino.
WILEY: We got to be safe, so, you know, safety first. 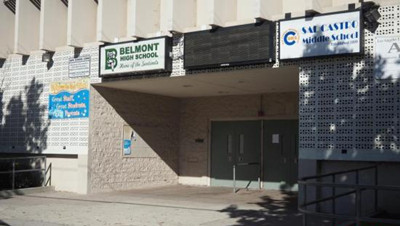 ROTT: That was the message from LA Unified superintendent Ramon Cortines.
(SOUNDBITE OF ARCHIVED RECORDING)
RAMON CORTINES: Based on past circumstances, I could not take the chance as it relates to one student or our staff that serve our students.
ROTT: The threat came late Monday night in the form of an email. Los Angeles police chief Charlie Beck says it specifically threatened LA Unified campuses and mentioned explosive devices, assault rifles and machine pistols. News that a similar threat was made against New York City schools and that that school district decided it was a hoax came later. But LA city leaders and officials, including Mayor Eric Garcetti, stood by LAUSD's decision.
(SOUNDBITE OF ARCHIVED RECORDING)
ERIC GARCETTI: We will continue to hope that this is nothing and that our children can be back at school tomorrow. But as a parent and as a mayor, an abundance of caution is something that I think all of us who have children appreciate.
ROTT: LA Police chief Charlie Beck defended the decision as well.
(SOUNDBITE OF ARCHIVED RECORDING)
CHIEF CHARLIE BECK: I would say this to people that are critical. It is very easy in hindsight to criticize a decision based on results that the decider could never have known.
ROTT: LA Unified has announced they've given the all-clear after searching the district's schools and plan to reopen them tomorrow. Nathan Rott, NPR News, Los Angeles.