JUDY WOODRUFF: Now to today's attacks in Jakarta, Indonesia, claimed by the Islamic State group in the world's most populous Muslim-majority nation.

And a warning: Some of the images may be disturbing.

MARGARET WARNER: It is a moment of cold-blooded calculation, as gunfire cracks, two suicide bombers crouch, make ready, and then — in all, five attackers and two civilians died when multiple gunmen and suicide bombers struck the center of Jakarta this morning.

REZA, Witness (through interpreter): At first, I thought it was the explosion of car tire, but then I realized that it was bomb explosion. Then I saw the motorcyclers, all wearing black clothes. And they pulled out long guns.

MARGARET WARNER: The attackers hit a police booth at a busy intersection with guns and grenades. Another target was a nearby Starbucks. Police say one bomber blew himself up inside, and waiting gunmen tried to shoot the survivors as they fled.

Its statement read: "A group of soldiers of the caliphate in Indonesia targeted a gathering from the crusader alliance that fights the Islamic State in Jakarta."

Jakarta's police chief offered a slightly different account. He pointed to an extremist group based in Southeast Asia with ties to ISIS. 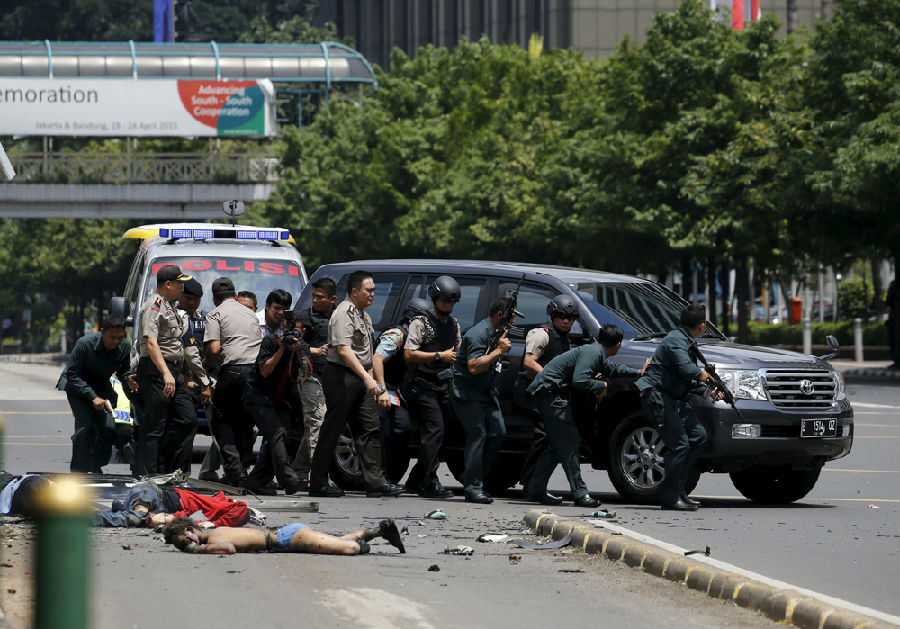 MAJ. GEN. TITO KARNAVIAN, Police Chief, Jakarta (through interpreter): There's a militant named Bahrun Naim who wants to be the leader of the region. All leaders of ISIS in Southeast Asia are competing to be the chief. That's why he plotted this attack.

MARGARET WARNER: Naim is believed to be in the Islamic State's de facto capital, Raqqa, Syria, according to police. But they warned today that his group has also expanded its efforts across Indonesia, Malaysia, the Philippines and Thailand.

Just last month, police arrested more than a dozen people on the Indonesian island of Java on charges of planning attacks on Christmas and New Year's Eve. They said some received funding from Naim. Still, there were questions today about the level of sophistication in the Jakarta attacks.

JOE COCHRANE, International New York Times: According to terrorism analysts who I spoke to today, they didn't think much of the actual tactics of this group or the attackers who were involved today, based on the fact they didn't really kill anybody.

MARGARET WARNER: Joe Cochrane is the Indonesia correspondent for The International New York Times, based in Jakarta. He spoke via Skype.

JOE COCHRANE: A number of these people's colleagues had been arrested over the last three or four weeks in various parts of Indonesia, so the feeling was these guys were about to be picked up, and they were just trying some sort of last gasp effort at glory or revenge against the police.

MARGARET WARNER: The largest Muslim country in the world, Indonesia has long been a target of violent Islamist extremism. The most notorious incident came in 2002, when the al-Qaida-linked Jemaah Islamiyah attacked nightclubs on the island of Bali, killing 202 people.

And in 2009, the same group struck two hotels in Jakarta, leaving eight dead. Since then, the government has led a massive effort to dismantle Jemaah Islamiyah, but there are concerns of a resurgence.

Meanwhile, Jakarta and its 10 million people are now on high alert, as the investigation begins.

JUDY WOODRUFF: And for more on how ISIS inspires and influences militant Islamist groups around the world, I'm joined by Joby Warrick. He is a national security reporter at The Washington Post and he's author of the book "Black Flags: The Rise of ISIS."

Joby Warrick, welcome back to the program.

JUDY WOODRUFF: Help us first, though, understand who is this group that is claiming responsibility? It sounds like there are different groups operating around that part of Asia.

JOBY WARRICK: Yes, but there are a number of these Southeast Asians in ISIS proper and working out of Syria.

There's a battalion there that's called Katiba. And they have actually been successful in attacking Kurdish targets. They have gone on the Internet claiming credit, claiming that they're strong and trying to drive other recruits to them.

And so you see this. Once again, this is almost like the model we have seen in other places, Belgians and French and Germans and others kind of calling out in a nationalistic way the people to come from the region and help and join the ISIS cause.

JUDY WOODRUFF: So, is there a firm connection between Jakarta and what's going on in Syria and Iraq?

JOBY WARRICK: I think there is, in the sense that there is this common effort by ISIS to try to create these cells all over the world. We have sign it in all kinds of places, and certainly North Africa, Yemen, Pakistan, Afghanistan.

But they really, really want to start a cell in Southeast Asia. They have been looking for over a year at trying to start something in Indonesia particularly. And there are groups who are there. There are groups who are allied with them, or at least ideologically allied with them, who like to participate. And some of them claim credit and do things on their own to try to get the ball rolling.

JUDY WOODRUFF: And how do we distinguish between groups that are truly allied and taking orders from ISIS central, wherever that is, and groups that are just wanting to do — wanting to carry out attacks because they admire what ISIS stands for?

I think, in this case, there's been enough messaging from ISIS' headquarters in Raqqa, saying, we want to do this. We want to start something in that part of the world. And it's easy to see at least the outlines of a plan, some kind of reaching out to a region and trying to get people to do something locally, just to establish a presence, just to show that they're there.

And so this might be what we're looking at in this case.

JUDY WOODRUFF: So, just how well-organized are they in Southeast Asia? What does it look like?

JOBY WARRICK: This is new, because ISIS hasn't really done anything there before. But they do have at least 600 Southeast Asians in Syria that we know of. Lots of people have come to that region to train. Lots of them have come back to the region to start things.

There are lots of other alliances they could make with local groups, ones that have done the attacks in the 2000s, some really horrific ones, as we have seen. So, this is potentially the start of something new and dangerous.

JUDY WOODRUFF: So, they go to Syria and train, and most of them don't stay. They stay long enough to learn whatever tactics they need, and then they're going back? I mean, has that been documented?

JOBY WARRICK: It has been documented.

It's kind of one leverage point that local governments have, that they can try to stop these people as they come back. It's not always possible. These borders are sometimes more porous than we like to think. And, sometimes, international travel can be porous with fake passports and visas and that sort of thing.

But this is really something that people in the region are very concerned about, and they're starting to see evidence that it is happening.

JUDY WOODRUFF: We have pointed out that Indonesia has the largest Muslim population in the world in any single country. Should we be surprised that there haven't been more ISIS recruits from there?

JOBY WARRICK: Yes, you would think so. There are 210 million Muslim Muslims in Indonesia. Only about 500, experts say, have gone to Syria to join the fight. That's perhaps partly a reflection of the fact that it's far, it's distant.

But it's also the fact that the brand of Islam in Indonesia tends to be more moderate, so you don't see as many radicals, but there are some, and the ones that are there are willing to do very brutal things.

JUDY WOODRUFF: And you were telling us that ISIS has had a pretty sophisticated effort to recruit, that they're using social media and so forth, which we're seeing them use around the world.

JOBY WARRICK: Yes, but the wrinkle on it is, they use local people to appeal to people in their homelands, using local tongue, using Malay, using sort of the common language, and also appealing to sort of national pride or — and to Islamic pride. Come, represent the cause in Syria or fight for us in other parts of the world.

So this is really the ISIS model these days.

JOBY WARRICK: Absolutely worried about it. They're tracking it very closely.

It looks like the Indonesian police or the government there has been very aggressive in trying to find these people and root them out. It's not always possible to get all of them, because they're pretty good at keeping a low profile.

JUDY WOODRUFF: Joby Warrick of The Washington Post, we thank you.

JOBY WARRICK: Enjoyed it. Thank you.