There is bad news for banana lovers. The most common banana in the world is in danger of becoming extinct. It is called the Cavendish banana and people eat it all over the world. A fungus called Tropical Race 4 (TP4) is killing millions of banana plants. The fungus blocks small tubes that absorb water inside the plant. This means the plant cannot get the water it needs and so it dies. Scientists first discovered TP4 in Malaysia in 1990. It quickly spread to other parts of South-East Asia and then to Australia and Africa. TP4 is spread in dirt that is carried by the wind, water, cars and even people's boots. A tiny amount of TP4 can spread across large areas very quickly. Some scientists believe TP4 could kill the banana industry. 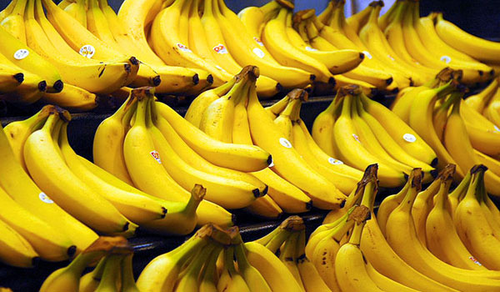 This is not the first time that a variety of banana has become extinct. Before we started eating the Cavendish banana, we ate a variety called the Gros Michel. Fifty years ago, the Gros Michel banana was the main banana grown around the world. However, it was hit by a fungus called Panama Disease. The Gros Michel banana became extinct in 1965 and banana growers switched to the Cavendish banana. The problem for the banana industry is that even if they burn all their banana plants, the fungus stays in the soil. This means new plants cannot be grown. Scientists say one option is genetically modified (GM) bananas that are resistant to diseases like TP4 and Panama Disease.