JUDY WOODRUFF: But, first, rhino and elephant poaching has reached unprecedented levels, as the black market price of rhino horn and ivory tusk has skyrocketed.

University of California Berkeley students Daphne Matziaraki and James Pace-Cornsilk traveled to Kenya and found that the trafficking networks are often connected to international terrorist groups and, on the ground, the situation resembles war.

NARRATOR: Ol Jogi Conservancy in Northern Kenya is home to 46 eastern black rhinos. There are 500 left in the world.

JAMIE GAYMER, Manager, Ol Jogi Conservancy: We had two rhinos, I believe, to have been shot with a firearm, and one of those rhinos had its horns cut off.

NARRATOR: Jamie Gaymer manages this rhino sanctuary and protects the surrounding 58,000 acres of land from a major threat, poachers.

JAMIE GAYMER: The enemy who are trying to come and poach our rhinos are becoming more advanced, investing in higher-tech equipment, automatic weapons. Perhaps their own intelligence is quite well-established, and we have to evolve our security in order to combat that.

NARRATOR: Black market buyers from Asia and the United States have driven the price of ivory to $1,000 per pound, and rhino horn used in traditional Chinese medicine and seen as a status symbol to $45,000 per pound, making it more expensive than gold. 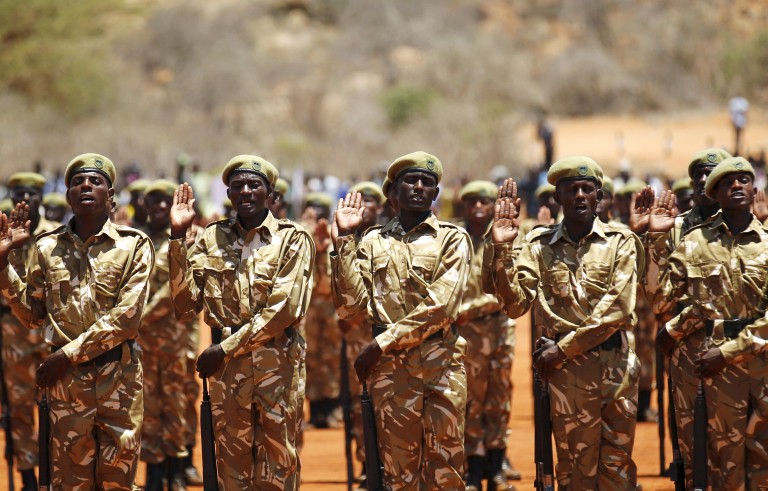 JAMIE GAYMER: I don't know the definition of war, but certainly there is a very advanced enemy who are putting us under considerable threat.

NARRATOR: And this threat may be linked to terrorism. The Elephant Action League has been investigating wildlife trafficking for years. In 2011 and 2012, co-founder Andrea Crosta spent 18 months in Kenya, concealing his identity and meeting with ivory traffickers whom he says were brokers for the terrorist group Al-Shabaab.

ANDREA CROSTA, Co-Founder, Elephant Action League: Then, actually, the traffickers described to us how they organized the pickup in this no man's land. Al-Shabaab or Al-Shabaab emissaries were coming over with the technical, you know, the pickups with their own scale, paying cash, always punctual, to the point that some of the traffickers told us that Al-Shabaab back then was a preferred customer, because no tricks, no games, paying cash, and then disappear.

NARRATOR: Government sources confirm a connection between wildlife trafficking and terrorist groups. A 2013 white paper from the U.S. government's Directorate of National Intelligence describes how poaching threatens security in Africa.

"Demand for rhino horn and ivory so outpaces supply, and is so lucrative, that criminal elements of all kinds, including some terrorist entities and rogue military officers, are becoming involved in countries across East, Central, and Southern Africa."

The U.S. government and organizations such as the Clinton Global Initiative have tried to address the problem of wildlife poaching by reducing demand for ivory and strengthening trafficking enforcement, but Andrea Crosta says those efforts are not targeting the source of the problem.

ANDREA CROSTA: They thought that the best way to deal with this problem is to put more boots on the ground, to send a lot of weapons, to train rangers. You don't address this part of the problem with boots on the ground. OK? You address it with intelligence work, with investigations.

NARRATOR: Back in Kenya, Gaymer protects the wildlife at Ol Jogi with a fleet of aircraft, attack dogs, and more than 100 armed men.

JAMIE GAYMER: To fight poaching is like you are in war.

NARRATOR: As rangers head out for their nightly patrol, they're never sure how dangerous their 12-hour shift will be.

JAMIE GAYMER: Unfortunately, it's got to the level now where human lives are being lost.

NARRATOR: After reports of overnight gunshots, Gaymer is out early one morning conducting an aerial surveillance, counting the rhinos to make sure none were poached.

JAMIE GAYMER: The first layer on the ground are the ones who have to face the bullets, unfortunately.

NARRATOR: This time, all the rhinos, and all the rangers, were accounted for. But the threat comes not only from poachers, but also from the lure of big money. Poachers earn a lot more than rangers, according to ranger John Kabachia.

JOHN KABACHIA, Ranger: There's that issue that the rangers, they are being paid in peanuts. That's why they're being — some of them, they are being turned into being poachers. It's easy for you, even me as a ranger, it's easy for me to be dragged in that syndicate.

NARRATOR: Another ranger, Lakini, was a poacher until two years ago, when he switched sides and decided to protect wildlife, instead of hunting them.

LAKINI, Ex-Poacher (through interpreter): I have been killing elephants since I was 14 years old. I started hunting illegally when I was a very young boy. I learned how to use a gun a long time ago. If I was still poaching, I probably would have been killed by rangers by now.

JAMIE GAYMER: I don't think the problem is going to get any better anytime in the near future.

NARRATOR: For now, Jamie and his rangers continue their battle against an increasingly well-armed and well-funded enemy, with no end in sight.