GWEN IFILL: A surge in anti-Semitic attacks is driving European Jews to move to Israel and other countries where they feel safe. Over the last two years, nearly 20,000 Jews have left Europe, according to the Jewish Agency, a group that tracks immigration to Israel.

Special correspondent Malcolm Brabant reports tonight from Denmark and Sweden on the fears there, and the attempts to reduce the tension.

MALCOLM BRABANT: What about for the Jewish community as well, because they feel particularly vulnerable?

LARS LOKKE RASMUSSEN: Yes, I realize that. And for that reason, we are in close cooperation with the Jewish community and will do our utmost to protect them. We insist to live side by side in a peaceful manner.

SERGEOT UZAN, Dan Uzan's Father: The most important message is that we have to be together and to fight terrorism together. Evil will not win and with power. We have to win it with goodness. 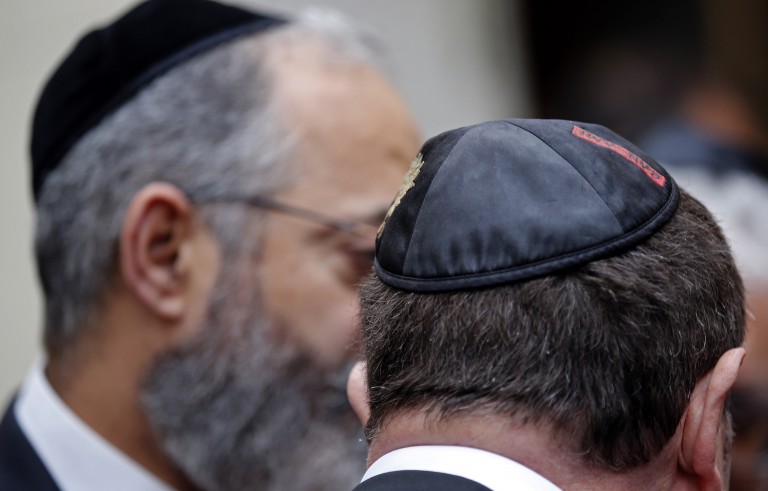 MALCOLM BRABANT: Hannah Bentow was the girl Dan Uzan died protecting. Her bar mitzvah, or coming of age party, was in full swing when the terrorists attacked the synagogue.

Every week, before the Jewish Sabbath, her mother, Mette, has a special ritual, lighting a candle for Dan Uzan. Mette Bentow's high profile has made her a target for anti-Semitic behavior. Since the shooting, she's received numerous threats via social media, and in broad daylight in central Copenhagen.

METTE MIRIAM BENTOW: He spat at me. So, I did get a little yelling, but it was mainly the spitting at me that was very uncomfortable.

MALCOLM BRABANT: Mette Bentow believes that, these days, anti-Semitism comes predominantly from Muslims. But she's trying to maintain a sense of idealism and friendship with Niddal El Jabri.

El Jabri, a Palestinian whose family hails from Hebron on the West Bank, was instrumental in organizing a peace ring around the synagogue following last year's attack.

NIDDAL EL JABRI, Sports Promoter: It's all about the kids for me and it's always been about the kids for me. We want to make this society safe for them. I keep saying that the Jewish school here in Copenhagen is one of the biggest examples of how humanity has failed in this country, that you have to have armed forces, you have barbed wire around the school, you have cameras all over.

When that is the situation, adults need to sit down and really think about what this country is doing to its children.

MALCOLM BRABANT: Mette Bentow could not bear to be in Denmark on the anniversary. She took her daughter to Israel, to which she's increasingly drawn.

MALCOLM BRABANT: Historically in Europe, anti-Semitism has come from the right wing, but most Jewish leaders believe the greatest threat now emanates from the continent's growing Muslim population. This is a gathering of the extreme Islamist political party Hizb ut Tahrir last year, not long after the Copenhagen attacks.

Hizb ut Tahrir wants a worldwide caliphate. It's banned in several European countries, but not in Denmark. Its spokesman is Elias Lamrabet.

What is your message to the Jews of Copenhagen who feel especially vulnerable?

ELIAS LAMRABET, Spokesman, Hizb ut Tahrir: I don't feel responsible to have a specific message to the Jews of Copenhagen. And I'm not certainly that they in fact are especially vulnerable compared to many other people. So, I don't really have any comment to that question.

MALCOLM BRABANT: How can you say they are not vulnerable when…

ELIAS LAMRABET: I said I don't have a comment to that question.

MALCOLM BRABANT: Is that because it's too difficult for you?

ELIAS LAMRABET: No, not at all. It's because I think this interview is over.

MALCOLM BRABANT: After the synagogue attack, Copenhagen's chief rabbi, Jair Melchior, says that dialogue with local Muslim leaders has intensified and improved, and claims that Denmark is safer for Jews than France, where thousands are leaving.

RABBI JAIR MELCHIOR, Spokesman, Copenhagen Synagogue: The majority of the Jews leaving France, they leave from very specific neighborhoods. They are usually Jews who emigrated, or their parents emigrated to France. They emigrated to live in a better place.

Now, if they live in a bad neighborhood with a very big percentage of Muslim population, then they can find themselves — leave.

MALCOLM BRABANT: After a machete attack on a Jewish teacher last year in the southern French port of Marseille, the city's chief rabbi urged his community not to go out in public wearing Jewish symbols such as the kippa. He was quickly criticized for what was called his defeatist attitude.

But here in Scandinavia, such discretion has become essential, across the bridge to Malmo, whose large Muslim population has expanded drastically during Sweden's short-lived open-door refugee policy. At the Jewish kindergarten, they're preparing traditional Sabbath bread. The numbers of children attending have dropped sharply since the Copenhagen attacks. We weren't allowed to show their faces for security reasons.

Today, the Jewish community numbers just 500, a quarter of its size a generation ago. Its acting head is Freddy Gellberg.

FREDDY GELLBERG, Interim Vice President, Jewish Congregation: It's essential for the Jewish community in this city. If we don't have any kids, no future. Our, what should I as you know, biggest enemy is assimilation, in a way, traditions and culture, which are most important for most of us, maybe not the Jewish religion.

FREDRIK SIERADZKI, Jewish Information Center: Why can't we dress the way we want to dress without risking being attacked?

MALCOLM BRABANT: Fredrik Sieradzki is running a new information center that's part of a rear-guard action to give this ever-shrinking minority a more powerful voice.

FREDRIK SIERADZKI: Most Jews are wary about wearing symbols, Jewish symbols, of course. Young Jewish kids are very — I know, are very careful not to walk around with Star of David or other kind of — or a yarmulke on their head, a kippa.

MALCOLM BRABANT: If anyone understands the situation, it's Siavosh Derakhti, who's been feted by President Obama for urging Muslims to resist anti-Semitism and to integrate. A young Swede of Iranian Muslim heritage, his peacemaking efforts have put him on the same front line as the Jews.

SIAVOSH DERAKHTI, Founder, Young People Against Anti-Semitism: Every day, I get the threats that I'm a traitor, I'm a Jewish lover, I'm a pig, I have to die, they're going to kill me.

I'm here in Sweden because my family flew from Iran and from the dictatorship. What we see in Malmo in Sweden, that this democracy, that we cannot live side by side. And I want to make that happen.

MALCOLM BRABANT: Nima Gholam Ali Pour's parents fled from Iran in 1988 to avoid his brother being conscripted as a child soldier. He belongs to the right-wing Sweden Democrat Party and fears anti-Semitism will increase as a result of the country's open-door policy.

MALCOLM BRABANT: Jewish communities believe that, if these children are to have a future, newcomers must leave behind the conflicts of the Middle East and accept the European aspirations of tolerance and peaceful coexistence.

But critics say that Sweden has a poor integration record. So, is that an impossible challenge?

For the "PBS NewsHour," I'm Malcolm Brabant in Scandinavia.