JUDY WOODRUFF: Now we turn to politics and our series looking at how this election differs from years past.

Tonight, we focus on the change in advertising, how candidates are communicating with voters, both in paid and free media.

There's nothing quite like the candidates meeting directly with voters, but paid political ads on TV long ago became the way to reach more people than the candidates themselves ever could in person.

The firm Kantar Media CMAG keeps track of ads, and it reports total spending on spots for and about the candidates has topped $380 million so far this election season. That figure includes not just spending on ads by the candidates, but also that by outside supportive groups, so-called super PACs.

Ironically, two candidates who dropped out, Republicans Jeb Bush and Marco Rubio, account for about one-third of this season's total, while Democrats Bernie Sanders and Hillary Clinton have benefited from $100 million in ad spending together.

JUDY WOODRUFF: But the most telling number may be $17 million. That's all that Donald Trump has spent as he's sat astride the front-runner position in the GOP. Instead, Trump has relied mainly on what's called free media: news coverage and social media like Twitter.

All of the candidates use Twitter, but Trump has made strategic use of tweets to get his message out. He has more than seven million followers. Hillary Clinton has nearly six million.

There's also the extensive exposure candidates are getting from news coverage, prime-time TV debates, and nationally televised town halls. This evening, for instance, Ted Cruz and John Kasich will appear in town halls in New York, and Clinton and Sanders debate in Brooklyn.

For more on how paid and free media are shaping the presidential race, we're joined now by Elizabeth Wilner, the senior vice president for political advertising at Kantar Media. And Ken Goldstein, he's political science professor at the University of San Francisco.

And we welcome both of you to the "NewsHour." 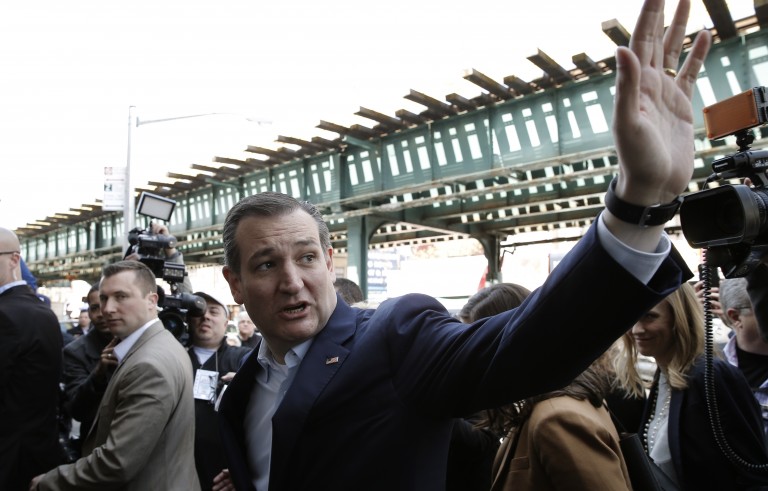 JUDY WOODRUFF: So, to listen to those numbers that we just heard, Elizabeth Wilner, you would think that paid advertising has not had the impact in this election cycle that it has in the past.

How do you see it?

Historically, paid advertising and the ability of candidates to raise enormous sums of money, that has helped to distinguish the front-runner, right, who has the most money to spend on TV. In this case, the candidate who has spent the least amount of money on TV and put the least effort into his TV advertising is the front-runner on the Republican side.

JUDY WOODRUFF: How do you see it, Ken?

KEN GOLDSTEIN: Well, as Elizabeth pointed out, usually, the rule in politics is follow the money.

So, overall, it suggests it may not be having an impact, but what we did see in Wisconsin was a focused advertising effort.

JUDY WOODRUFF: The Wisconsin primary a couple weeks ago.

KEN GOLDSTEIN: The Wisconsin primary a couple weeks ago.

A focused advertising effort, along with some other things, still can move numbers.

JUDY WOODRUFF: But when you look at that, Elizabeth Wilner, and you look at the money that was spent earlier by — even by the candidates who are no longer in the race, what did you learn from that this year?

ELIZABETH WILNER: Well, we learned that voters are looking for something that they clearly didn't see in the array of candidates who were out there early spending money on TV.

There were a number of candidates spending a lot of money in Iowa. None of them — you know, they all dropped out early on. The candidates who were spending most money wound up having to drop out in February or March.

What we saw was voters looking for something that they just weren't getting from the usual slate.

JUDY WOODRUFF: And is it, Ken Goldstein, that the messages weren't working?

I mean, I'm not asking you to analyze what voters saw in every one of these spots, but was there something quantitative — qualitatively different this year about what these candidates were saying in their ads?

KEN GOLDSTEIN: I think we're all guilty — and I'm probably the most guilty — of falling into the trap of counting the bombs, looking at the targeting, how much — how many ads, how much money was spent.

And we forget the message matters. And so, yes, how much money you spend matters, how many ads you air matters. If you target it smart, that matters. But, at the end of the day, if the message isn't compelling, the effect of that ad is still going to be zero.

And I think that's what we saw in lot of these early primaries, where, as Elizabeth said, the message, even if brilliantly targeted and lots of money behind it, was either not crafted correctly or that's just not what the voters wanted to buy.

JUDY WOODRUFF: It does look like, Elizabeth Wilner, that some of the — at least on the Democratic side, some of the spots that Hillary Clinton and Bernie Sanders were using earlier, they're still using.

ELIZABETH WILNER: Yes, they are repeating some of the same spots over and over again as they go from state to state. Clearly, they have some favorites that they feel are particularly effective.

JUDY WOODRUFF: How do they measure what is effective?

In Sanders' case, the America ad got a lot of social media pickup, so they determined that that was an effective ad.

We clearly know it's more than the $18 million that he's actually spent. But it's calling into news shows and calling into local news shows and national news shows and cable news shows. So, it's absolutely in the hundreds of millions of dollars, because, listen, one of the main reasons why you use paid advertising is, if you folks in the media aren't talking about it, you have to get an ad to get the — to generate some media conversation.

Well, Donald Trump doesn't seem to need that to generate conversation and to generate people talking about him and his ideas.

JUDY WOODRUFF: All he has to do is tweet.

ELIZABETH WILNER: All he has to do is tweet once.

He probably gets more value out of one tweet than many of the candidates have gotten out of an ad this cycle.

How do you see the difference, though, between paid and free? Can you quantify the value of free media vs. news coverage and social media vs. paid ads?

ELIZABETH WILNER: Well, it's really difficult, as Ken said, to quantify the value of it.

When you're doing paid media, at least you're controlling the message that is coming out. So if you want all of your spots to be positive, they will all be positive. If you want to spend some of your money on negative attacks, you can do that.

With earned media or free media, it's a mix. It is what you get. And Trump coasted on some fairly positive media for a long time. More recently, and in Wisconsin, he was having to deal with more negative media.

And in the last few weeks, the coverage of him has been more mixed and more negative. What's interesting is, he hasn't felt a need to spend any more on TV because of that, but he may down the road need to start doing that.

KEN GOLDSTEIN: Focusing on my old home state of Wisconsin, I think that's an example of when it works. So it's not just paid media. It's not just earned media. But, in Wisconsin, what you had was free media, which was conservative talk radio, anti-Trump.

JUDY WOODRUFF: So, what do you say, Ken Goldstein, to people who say, well, it looks like paid advertising doesn't work anymore? What do you say?

KEN GOLDSTEIN: It depends what you mean by matter, right?

Listen, there's big fundamental factors that are obviously moving this election that are going to move the general election. But if this race gets into field goal range or 1 or 2 or 3 percentage points, then focused television advertising can matter at the margin.

If this ends up being a 10 percent or 15 percentage point race, no, it's not going to matter. But, interestingly, folks might be worried about, oh, there's not going to be any advertisings in the presidential race, because maybe it is going to be less competitive than we think.

And we have to remember, it's not just the presidential.

But, Elizabeth Wilner, finally, if somebody says to you, paid advertising is history, what do you say?

ELIZABETH WILNER: Oh, well, I can't laugh right now, but I would laugh.

ELIZABETH WILNER: It's always effective at the margins, as Ken has said. And in a close race, it really does make a difference if it's done well.

JUDY WOODRUFF: Because people who don't see Twitter and don't see the news media are going to be seeing other television and radio where these paid spots will be.

And there will be a number — a good portion of people in a close race at the end of the day who are not online looking for information, who are not following tweets, who are not necessarily watching the news, but they might be watching a baseball game or a hockey game, and they will see an ad, and that might help change their mind or make up their mind.

JUDY WOODRUFF: That's what makes it all so hard to predict.