JUDY WOODRUFF: The top two candidates in the presidential race are feeling pretty good today, after they cleaned up in the New York state primaries.

Now they're looking to hold their challengers at bay in the contests yet to come.

Donald Trump, fresh off winning big in his home state, moved on to the Midwest and the Indiana primary on May 3. Unlike last night, when he took a more restrained tone, today, he was on the attack.

DONALD TRUMP: I'm about 300 delegates ahead of lyin' Ted.

JUDY WOODRUFF: But in Pennsylvania today, Texas Senator Ted Cruz insisted the race for the GOP nomination is far from over. 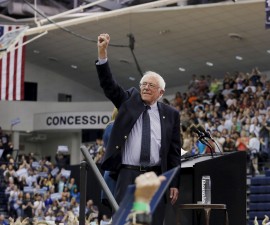 SEN. TED CRUZ (R-TX), Republican Presidential Candidate: And there's a reason Donald wants all of the lapdogs in the media to say that the race is over, because the three weeks that preceded yesterday, there were a total of five states that voted, Utah, Wisconsin, North Dakota, Colorado, Wyoming. In all five, we won a landslide.

JUDY WOODRUFF: Cruz predicted a contested convention is inevitable, telling a Philadelphia radio station nobody is getting 1,237 delegates to clinch the nomination before then.

But on the Democratic side, Hillary Clinton's double-digit victory last night puts her on track to wrap things up before convention time.

HILLARY CLINTON (D), Democratic Presidential Candidate: The race for the nomination is in the home stretch, and victory is in sight.

There were mixed messages coming out of the Bernie Sanders campaign after his 16-point loss in New York. Last night, senior adviser Tad Devine said they will — quote — "assess where we are after next week's primaries."

Today, he took a different tack.

TAD DEVINE, Senior Bernie Sanders Campaign Strategist: I think we have a lot of time. We have got over 1,400 delegates still to be picked. We have got huge states like California still in play. Only Bernie Sanders can do something that we need to do to win the general election, bring in young people.

JUDY WOODRUFF: Sanders himself took the day off from campaigning, and returned home to Vermont.