JUDY WOODRUFF: But, first, we are kicking off a weekly series tonight that will expand our coverage of science and technology on our broadcast and online.

Our science correspondent Miles O'Brien will frequently be our guide on Wednesdays, as he reports on a wide variety of subjects, including the environment, space and technology, and takes us to the leading edge of research and thinking in these fields.

Tonight, we start with an ambitious dream to create a tube-based high-speed transportation system of the future, one that would cost billions. You may have heard of it, the Hyperloop.

MILES O'BRIEN: No rest for the weary on Saturday mornings at MIT.

Sandwiched cheek to jowl between grad students building a high-performance electric race car and a solar-powered endurance vehicle, you will find the Hyperloop team hard at work.

On this morning, they were attaching the outer shell, or fairing, for the first time.

JOHN MAYO, MIT Hyperloop Team: I trusted it would fit. I trust our team. Our team is really good. So, it's great to actually see if there on the pod.

MILES O'BRIEN: John Mayo is on the cusp of getting his master's in mechanical engineering. He is project manager of a 30-member team that he hopes is on the cusp of helping devise a fifth mode of transportation, to take its place beside planes, trains, automobiles and boats.

Hyperloop is a cross between the pneumatic tube you use at the drive-up teller, an air hockey table and a bullet train. Oh, and throw in Concorde too.

JOHN MAYO: One of the big differentiators here is that tube, because you have less aerodynamic drag, so you can go faster with less resistance.

MILES O'BRIEN: They are building this scale model to compete with about 30 other college teams in a totally tubular challenge this summer to demonstrate the best prototype.

MAN: The winning team, from the Massachusetts Institute of Technology, the MIT Hyperloop team. 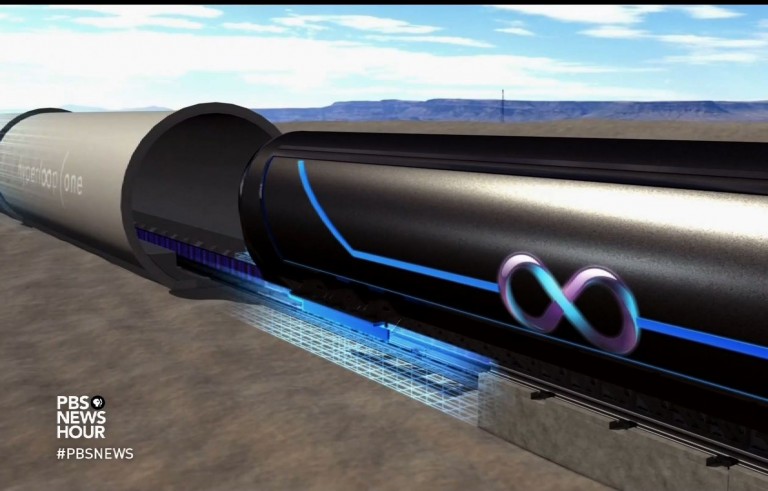 MILES O'BRIEN: They are the team to beat after winning the design phase earlier this year at Texas A&M. The basic concept is not new. A short pneumatic train line was built beneath Manhattan in 1870, but the idea was just a novelty then, and has remained in the realm of George Jetson's Dream-O-Vision ever since.

But, in 2013, this white paper changed the equation. It's a technical description of a supersonic Hyperloop that would carry people from Los Angeles to San Francisco in about 30 minutes, a proposal like this would normally be dismissed, but the author was the real-life Iron Man, Elon Musk, the founder of PayPal, electric car manufacturer Tesla, and SpaceX, the private company that launches rockets into low-Earth orbit and, lately, lands the spent first stages onto small barges in one piece.

JOHN MAYO: Elon has his way of making everybody excited about these seemingly outlandish ideas, but we have all the technology there to do it. It's just, you need the excitement and you need some funding behind it and you need people to push it. And Elon is the pusher.

MILES O'BRIEN: At that awards ceremony in College Station, Texas, the pusher surprised his pushees with an appearance. He got a rocket star welcome from his biggest fans. It was nerd nirvana.

ELON MUSK, Hyperloop Proponent: It's clear that the public and the world want something new, and I think you guys are going to bring it them. So, congratulations. Yes.

ELON MUSK: What inspired me is, I was stuck in L.A. traffic.

ELON MUSK: And I was an hour late for a talk. And I was thinking, man, there has got to be some better way to get around.

MILES O'BRIEN: When Musk got back to his desk, he started doing the math. His first thought, those pneumatic tubes. But using giant fans to create a supersonic gust of wind for 350 miles would create way too much friction. So what if the tubes were sealed up tight, a vacuum, and the pods were lifted with magnetic levitation?

With no friction or wind resistance, there would be nothing to stop the pod from going extremely fast. But sealing a 350-mile-long tube tight enough to hold a vacuum is also a nonstarter.

The MIT team believes magnetic levitation is the answer, but with no vacuum required, just very low air pressure inside the tube. They are testing arrays of common magnets that would levitate the pod over an aluminum track. The engineering challenge? The magnets provide lift, but also drag.

Philippe Kirschen is an aerospace and astronautics grad student.

PHILIPPE KIRSCHEN, MIT Hyperloop Team: The drag is just the price that you pay. You can't get the free lift, so you pay the price in drag, and our goal essentially is just to minimize the drag.

MILES O'BRIEN: Philippe is betting his career on this technology. As soon as he graduates, he will take a job at Los Angeles-based Hyperloop One, a leading start-up in this new field. Its co-founder and chief technology officer is former SpaceX engineer Brogan BamBrogan.

MILES O'BRIEN: The hype over Hyperloop One has brought the company $100 million in investment. And while it's an important step to demonstrate its electric propulsion system works, it's likely the journey to reality will be a lot slower than a speeding capsule.

JUDY WOODRUFF: In fact, one key part of the Hyperloop dream was put to the test today. Just how viable the propulsion system will be?

Miles was there for that demonstration, which took place about 30 miles outside Las Vegas, and he joins me now.

So, tell us, what exactly were they trying to prove today, and how did it go?

MILES O'BRIEN: Well, I think if you were to put it in Wright brother terms, this wasn't the Kitty Hawk powered flight moment. This was probably one of the glider tests that we're less familiar with that the Wright brothers did before that moment.

It was an opportunity for them to test out their linear electric motor, which will help drive this capsule eventually. They went from zero to about 105 miles per hour in all of about five seconds. It was a success, but in the grant scheme of things, an incremental success with many more steps to go.

JUDY WOODRUFF: So, what do the owners of this venture, what are they saying at this point?

MILES O'BRIEN: Well, they're trying to attract some investment, and they're doing a pretty good job so far. They have got about $100 million so far, attracting some serious deep-pocketed investors.

There's a lot of enthusiasm over this idea, and, thus far, what the engineers tell me is, there's no technological stumbling blocks that they foresee. Where it comes down to are the meddlesome issues of right of way and finding a way to make the tubes as straight as possible, because the straighter it is, the faster you go.

JUDY WOODRUFF: But that's going to involve some technology, too. So, I mean, just how practical a thing are we talking about?

MILES O'BRIEN: You know, it's hard to say right now, because there's a lot of thing that have to fall into place to make this happen.

Given the level of enthusiasm that people have and given the fact that traffic's not get anything better, the ideal of traveling 350 miles in all of a half-hour has quite an allure. Getting the rights of way, building the tubes, making sure there aren't too many sharp turns, so it slows down so much that it ruins its allure, is really something that remains to be seen. But given the enthusiasm, you know, we have to say this is something to watch for now.

JUDY WOODRUFF: You know, Miles, I have to tell you, traveling in China last year, I rode on the maglev train in Shanghai between downtown and that city out to its airport. It's only a matter of a few miles, but it went almost 300 miles an hour. How different is this from that?

MILES O'BRIEN: It's basically taking the train you were on in Shanghai, which is one of the most — the fastest, most sophisticated maglevs in the world, and putting it inside a tube.

You're essentially taking away the resistance of the air, for all intents and purposes. And that allows you to pretty much double the speed.

MILES O'BRIEN: Well, Judy, I guess you could say I'm kind of hyper about this experience.

I'm very excited to be back more frequently on the “NewsHour” doing science reporting. No one else is doing it like the “NewsHour.”

And we look forward to your suggestions. If folks out there have any ideas for science and technology stories that we can bring to you, by all means, let us know.

JUDY WOODRUFF: Miles O'Brien, it's great to have you with us. Thank you.