HARI SREENIVASAN: But, first: As families in Orlando were preparing to bury the first victims of the mass shooting, the president spoke today of grief beyond description. Many in the community are mourning for sons, daughters, family and friends who were just in their 20s and 30s.

We spent much of this past day listening to what survivors and members of the community had to say.

William Brangham has the story.

WILLIAM BRANGHAM: The president and vice president's visit today comes as the people of Orlando are finding different ways of coping and trying to recover from this massacre.

DON PRICE, Greenwood Cemetery: I think it means a lot. It shows that the nation is watching. I think that's the idealism at that point, that he's taken time, the president has taken time to let everybody know that, hey, he feels for them and is watching it.

WILLIAM BRANGHAM: But, for others, especially those who witnessed the attack firsthand inside the Pulse nightclub, ceremonies and visits can only do so much.

Jeanette McCoy drove to the club Saturday night and was inside with her friends Julian Amador and Yvens Carrenard when the shooting began. Another friend shielded McCoy, taking a gunshot to the back and allowing her to escape. She says her grief has made it hard to sleep. 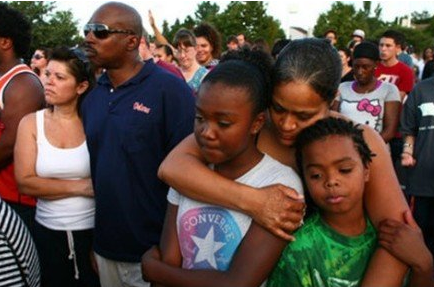 JEANETTE MCCOY, Survivor: We lost so many people. We lost a part of us. People don't realize. There's people who were dead, but the ones that survived, we can't hold a service for our heads.

WILLIAM BRANGHAM: Carrenard can't shake the images of what he saw as he escaped the club.

WILLIAM BRANGHAM: McCoy told us today she believes the police waited too long to rush in, which she says allowed it to become a hostage situation.

JEANETTE MCCOY: Through all of this that's going on, the gunshots didn't stop. They just didn't stop. I'm still yelling at the cops and telling them it made no sense. I said, it's one individual in there. How it is that there's hundreds of cops out there and no one is going in?

WILLIAM BRANGHAM: But others believe officials did the best they could and now is the time to focus on the future.

Don Price is helping the city of Orlando establish a permanent memorial here in Greenwood Cemetery. The city is offering free burial plots for any of the victims.