And in its aftermath, the crackdown has only intensified, with thousands more civil servants suspended from their jobs today, in addition to the thousands already under detention.

Marcia, you're standing in front what looks like, what — is this a pro-Erdogan rally?

This is the largest protest of the last five days. The first night, as you will remember, on Friday night, when the coup was attempted, President Erdogan called on his people to come down to the streets to save democracy, as he said, to protect him, to protect the government, and this is the fifth day.

People have come down in droves every single day. And this is by far the largest. I would say maybe 3,000 people are here tonight. The mood is one of nationalism, the Turkish flags, a lot of saving the fatherland.

What is very interesting is that Erdogan sent messages, text messages to his people, to the citizens of Turkey today, saying, please come down to the streets, as he has every day, to save the fatherland, to save democracy. And out they have come.

Public transportation has been free every day. Indeed, I took the ferry and I took a tram today, paid no money, and that is to encourage people to come down into the streets. 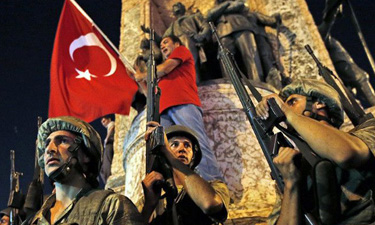 HARI SREENIVASAN: Tell me about the impact. Is there an impact that you can feel, though, the people that you talk to can feel about all these detentions and firings?

MARCIA BIGGS: The crackdown over the last couple of days has been brutal, as you mentioned, 30,000 suspensions of various ministries, police and education.

That's the people who work in the prime minister's office, judges, prosecutors, 15,000, as you mentioned, members of the Education Ministry; 1,500 deans were asked to resign, and that's in addition to the 1,000 civilians that were arrested and the 6,000 soldiers that were arrested.

And, basically, the feeling that I have gotten from people is just get a wait-and-see attitude. There is a lot of fear for those, anyone who is opposed to Erdogan, of course. It was also announced today that any media organization with any ties to Fethullah Gulen could lose their broadcasting rights if they say anything that's critical of the government.

There were a couple of arrests for people who put on social media criticisms of President Erdogan. So, there is a lot of fear, not among this crowd, of course, because they are here in support of their president, but on the other side, there's a lot of fear and not a lot of talk, from what I have heard, just a lot of wait and see.

All right, so tell us about a little bit about Fethullah Gulen. What do his followers believe?

MARCIA BIGGS: Well, Fethullah Gulen is known mostly for his network of schools here in Turkey.

He and Erdogan were closely allied, until a couple of years ago, when there was a very bitter split over another case against rogue elements in the military, as well as corruption charges. He's in self-imposed exile, as you know, in the United States.

But members of the police, of education systems here in Turkey are a product of his schools. So, Erdogan supporters believe that it is his followers that could create this network of conspiracy.

HARI SREENIVASAN: So, are the people behind you concerned about some of the nationalist rhetoric that's coming up right now? Erdogan has said on TV in the past couple of days that he wants to reinstitute the death penalty. That has got consequences if Turkey wants to be a part of the E.U.

MARCIA BIGGS: I would not say that they're concerned.

I would say that they are repeating anything and everything that he says. Indeed, yesterday, in this square, not with these kinds of crowds, but the same mood, you had people hanging and burning in effigy of Gulen and shouting very inflamed rhetoric about bringing back the death penalty.

So, no, I do not believe, from what I have seen, that the people behind me are concerned about this. I would say that they are repeating it loudly.

HARI SREENIVASAN: Marcia Biggs joining us from Istanbul, thanks so much.