JUDY WOODRUFF: Swathes of southern Louisiana are still underwater after a weekend of historic flooding. At least six people died and thousands have had to leave their homes.

As far as the eye could see, there was water. The rising floodwaters took many in Louisiana by surprise. Whole neighborhoods were submerged, and more than 20,000 people were forced to evacuate. By today, many had managed to make it to makeshift shelters on higher ground.

TORINA HEBERT, Flood Victim: My house was underwater. I have three children. My sister lives in the Sherwood Forest area, and she was on top of her roof. And she has five children. 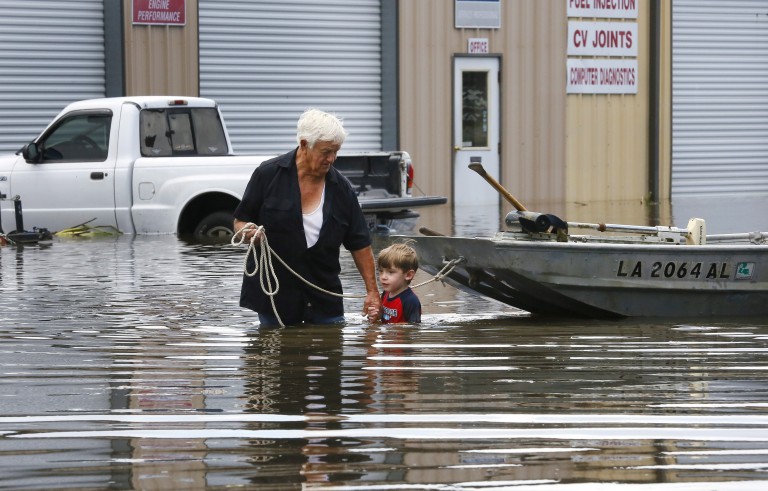 JUDY WOODRUFF: Since Friday, the state has been battered by an onslaught of torrential rain. In Baton Rouge and the surrounding area, the Amite River surged to more than 40s feet. Lafayette and its suburbs were inundated as well.

GOV. JOHN BEL EDWARDS (D-La): We're going to transition into a recovery phase as we can here. We're going to make every bit of assistance available to you as soon as we possibly can. That's my commitment as governor.

JUDY WOODRUFF: Rescue operations are still under way, and crews worked all weekend to pull stranded victims from their homes.

Others rescued trapped drivers as water surged into their cars. It's unclear when evacuees will be allowed to go home. More than 10,000 people are being housed in local shelters. Others are relying on the kindness of their neighbors.

WOMAN: They are the most kind, amazing people ever. I owe them so much.

JUDY WOODRUFF: Louisiana's insurance commissioner estimates 75 percent of those affected by the flooding do not have flood insurance.