Colombians are celebrating as peace has finally come to Colombia. Colombia's government signed a peace deal with the rebel group FARC. The deal ends 52 years of fighting, during which 220,000 people died and millions had to leave their homes. The deal comes after two years of talks between the two sides. Colombian President Juan Manuel Santos called the deal, "the beginning of the end to the suffering, pain and tragedy of war". A spokesman for the Colombian government said: "The war is over but also there is a new beginning. This agreement opens the door to a more inclusive society." Both sides will now work together for justice,for the victims of the conflict and to build a stable and lasting peace. 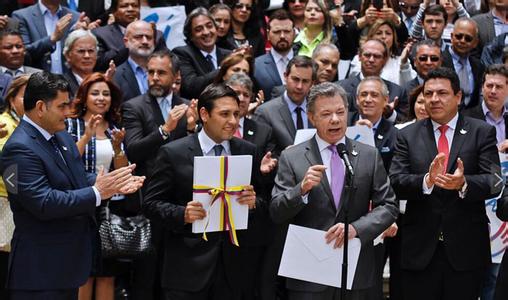 FARC is the Revolutionary Armed Forces of Colombia. It was formed during the Cold War to fight for farmers and workers. It started its fight against the Colombian government in 1964. It will now take part in the legal and political process to shape Colombia's future. In Bogota, the capital city, thousands of people came out to celebrate the news of the peace deal. One Colombian, Orlando Guevara, 57, told the Associated Press news agency: "I can die in peace because finally I'll see my country without violence, with a future for my children." The next step is for the Colombian people to vote on the peace deal on the 2nd of October. President Santos said: "It will be the most important election of our lives."