HARI SREENIVASAN: We begin with Donald Trump's day trip to Mexico City. It dominated the political headlines and drew even more attention to a high-profile speech he gives tonight on immigration.

It was the unlikeliest of summits, Donald Trump, who launched his campaign by speaking of Mexican immigrants as rapists and criminals and made other inflammatory remarks.

DONALD TRUMP (R), Presidential Nominee: It is a great honor to be invited by you, Mr. President, a great, great honor. Thank you.

HARI SREENIVASAN: And President Enrique Pena Nieto, who's compared him to Adolf Hitler.

PRESIDENT ENRIQUE PENA NIETO, Mexico (through translator): I have also voiced the grievances that we have felt in Mexico because of the statements that have been issued. But I'm sure that his interest is genuine in wanting to build a relationship and lead our societies to stability.

HARI SREENIVASAN: Trump agreed today on building a relationship, but he has also repeatedly called for building a wall along the border.

DONALD TRUMP: We did discuss the wall. We didn't discuss payment of the wall. That will be for a later date. This was a very preliminary meeting. I think it was an excellent meeting. 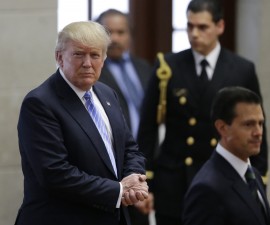 HARI SREENIVASAN: Lately, he's seemed to suggest his stance on immigration could soften. And his visit today came hours before he delivers a major speech on the subject this evening in Phoenix.

DONALD TRUMP: This is a humanitarian disaster, the dangerous treks, the abuse by gangs and cartels and the extreme physical dangers, and it must be solved. It must be solved quickly.

A political rival, former President Vicente Fox, condemned the invitation to Trump and even apologized.

VICENTE FOX, Former President, Mexico: He is not welcome to Mexico. By 130 million people, we don't like him, we don't want him, we reject his visit.

HARI SREENIVASAN: Pena Nieto has invited Democratic nominee Hillary Clinton as well. Her campaign says she will meet with him at the appropriate time.

Today, she addressed the American Legion Convention in Cincinnati, and dismissed Trump's Mexican trip as too little, too late.

HILLARY CLINTON (D), Presidential Nominee: You don't build a coalition by insulting our friends or acting like a loose cannon. And it certainly takes more than trying to make up for a year of insults and insinuations by dropping in on our neighbors for a few hours and then flying home again.

HILLARY CLINTON: Threatening to walk away from our alliances, ignoring the importance that they still are to us, is not only wrong; it's dangerous. If I'm your president, our friends will always know America will have your backs, and we expect you to have ours.