What is school for? This may seem an easy question to answer, but a poll taken in the USA shows people have different opinions on why kids go to school. The poll is called the 'Public’s Attitudes Toward the Public Schools'. It is from a global association of education professionals called PDK International. PDK asked Americans to name the biggest purpose of school. Just 45 per cent of people who took part in the poll said the main goal of school was to prepare students to pass exams. Around a quarter of people said the main purpose was to get kids ready to join the workforce. Just over 26 per cent of Americans believed the biggest reason for school was to teach children about citizenship. 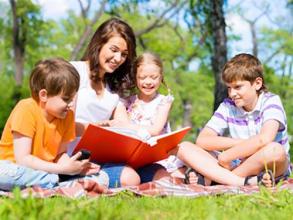 Johsua Starr, CEO of PDK, said the poll questioned whether today's schools were doing the right thing. He said: "One has to really question whether the direction we've been going is consistent with what the public wants." He quoted from author James Baldwin, who said in 1963 that the purpose of school is "to ask questions of the universe and learn to live with those questions." Students had different ideas about what school was for. Elena Brankov, 15, said school was to teach children to be creative, to share ideas with others and to use technology to make the world a better place. Lyndon Bailey, also 15, said school, "is just to make poor kids into robots who work and make rich people richer".