University graduates hoping to get a job as an investment banker in London could be disappointed if they wear brown shoes to their job interview. A new report highlights how the investment banking industry in the UK follows centuries-old, unwritten rules about how bankers should conduct themselves. The study was undertaken by the British government's Social Mobility Commission. Researchers looked at how the industry selected people in job interviews. They found that the industry was governed by "relatively opaque" codes of conduct. They wrote: "For men, the wearing of brown shoes with a business suit is generally considered unacceptable…within investment banking." 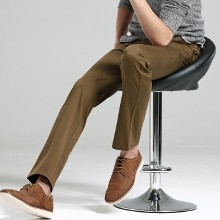 The survey suggested that people from working class backgrounds had to change their behaviour to fit in with bankers who were from middle and upper classes. One newly-appointed banker said: "I felt like my accent was a bit out of place, so I changed it." The study also said the industry discriminated against those who did not go to elite universities. The Commission's chairman said: "Bright, working-class kids are being systematically locked out of top jobs in investment banking because they did not attend a small handful of elite universities." He added: "It is shocking…that some investment bank managers still judge candidates on whether they wear brown shoes with a suit, rather than on their skills and potential."