ALISON STEWART: The ceremony in New York marked the moment when the first plane hit the trade center's north tower. Jerry D'Amadeo's father, Vincent, worked on the 103rd floor for the brokerage firm Cantor Fitzgerald, which lost 658 people that day.

JERRY D'AMADEO: Today, I'm proud to be here to memorialize my father. This is the place that gives me the chance to think about beautiful memories.

ALISON STEWART: Family members led the reading of the nearly 3,000 names inscribed on the national memorial to all 9/11 victims — office workers, plane passengers, emergency responders, members of the military.

When the second plane hit the south tower 17 minutes after the first, Howard Kestenbaum was working inside for Aon insurance. His wife remembered him today.

GRAVILETTE KESTENBAUM: Those of us who've lost our loved ones to violence form a kind of group. We know the shock and grief and anger that follows, the heartache that won't heal.

ALISON STEWART: A half hour after the trade center attack, 230 miles south of New York City, a third plane hit the pentagon — killing 59 people on the plane and 125 people inside the building. President Obama spoke to survivors and victims' families there. 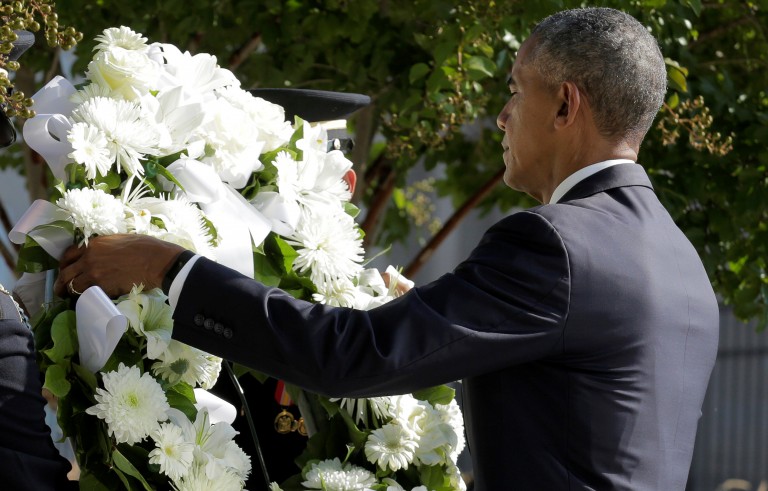 PRESIDENT OBAMA: Even as you've mourned, you've summoned the strength to carry on. And in your grief and grace you have reminded us that together there is nothing we Americans cannot overcome.

ALISON STEWART: After the trade center's south tower fell…Four minutes later, a fourth plane crashed in the western Pennsylvania town of Shanskville. Today, loved ones remembered the bravery of the 40 passengers and crew of united Flight 93, who fought back and thwarted hijackers' from reaching the u-s capitol in Washington.

The massive twin towers fell in under two hours. A striking image of today's ceremony was the teenagers reading the names of their parents. Parents who missed out on their childhood.

FAMILY MEMBER OF VICTIM: I love you, Papi, and we miss you, and I know you're watching over us.

Dad, the whole family misses you. It's been 15 years. This year, I'm applying to college, and I know I'll make you proud

ALISON STEWART: After his brother was killed on 9/11, Joe Quinn joined the army and served in Afghanistan and Iraq.

JOE QUINN: Looking back, it was hard to get through those weeks following 9/11, but an important part of me misses those days, because as a country, we were never more united, we were never more inspired. I know in our current political environment, it may feel that we're divided. Don't believe it.