A new report from the United Nations says one in eight people around the world does not have enough food. The U.N. reports that 842 million people suffer from very serious hunger. This is about 12 per cent of the world population. This percentage has gone down. It was 17 per cent in 1992. The U.N. says many countries still cannot find ways to feed their people. Africa is the region with the highest number of undernourished people. The U.N. says that one in five Africans is undernourished. In over 19 African nations, more than a quarter of the population goes hungry. The U.N. said 98 per cent of the world's hungry people live in developing countries. 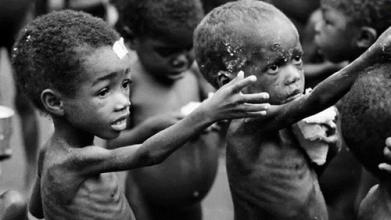 The World Food Programme (WFP) explained that undernourishment is "not having enough food for an active and healthy life" and an inability to "meet dietary energy requirements". The WFP said hunger is now the largest risk to people's health around the world. It is a more serious problem than AIDS, malaria and tuberculosis combined. One of the biggest reasons for people being hungry is war. The U.N. said developing countries that have experienced war in the past 20 years have bigger problems feeding their people. Scientists say this situation could get worse because of climate change. Hotter temperatures in more countries will mean farmers cannot grow enough food, leading to more hunger.